Deep run the roots of the Whitman School’s core values, reaching back to the school’s founding 100 years ago. A trip through the school’s first century reveals that these five principles, codified earlier this year, have guided the school since its beginning.

• The school established its global reputation early. By its third year, 1921, international students hailed from five countries, with four from China all seeking graduate degrees. Dean John H. Wharton ’11 described doctoral student Hsuan Wang’s intent to work for the Chinese railway system, writing Chancellor James Roscoe Day that Wang told him “that our instruction in this field is broader than that given at the Wharton School of Finance.”

• International management training programs dominated the 1950s. Between 1951 and 1955, more than 400 European executives attended programs in productivity; in the next five years people came from Formosa, Iran, Pakistan and the Philippines.

• A two-year program of technical assistance to the Industrial Development Center of the Philippines began in 1958, the school’s first overseas project. By the end of the 1950s, one in four faculty members had taught overseas, from Finland to Israel, Pakistan and Burma. 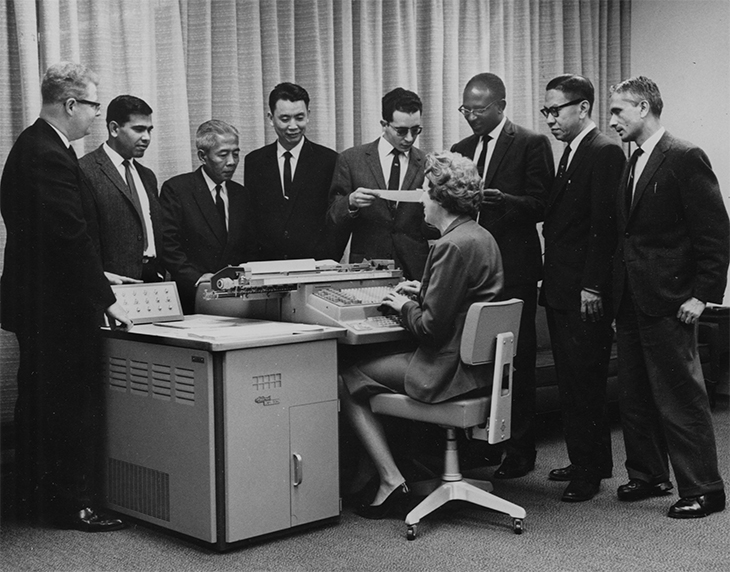 • The South Side Innovation Center, an off-campus community-based micro-enterprise incubator for small-business entrepreneurs in Syracuse, expanded in 2009.

• To increase access to graduate and business education programs, the school partnered with the National Black MBA Association in 2018, expanding its commitment to minority students that includes a chapter of the National Association of Black Accountants.

• Dual-degree programs are almost as old as the school. A six-year law and business combination program began in 1930, responding to the need to interpret tariffs and quotas established in an earlier era of American protectionism; this was a precursor of today’s 3+3 program with the College of Law. The dual master’s degree program with the S.I. Newhouse School of Public Communications, introduced in 1973, was the first of its kind in the country. In 2016, a dual-degree program with the College of Arts and Sciences became a third option for undergraduates, along with programs at Newhouse and the School for Information Studies.

• When the federal government approached Syracuse University for help in managing the burgeoning defense budget in 1952, the school and the Maxwell School of Citizenship and Public Affairs responded with what’s now the Defense Comptrollership Program. Its participants receive an MBA and a master’s degree in public administration in 14 months of study. 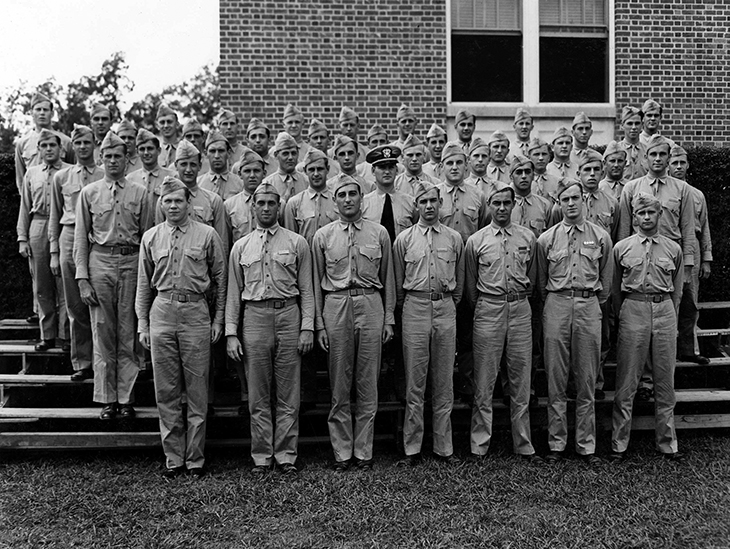 • That successful management training for the military expanded to civilian managers in 1954 with creation of the Executive Controls Program, initially a four-week summer program at Minnowbrook Conference Center in the Adirondacks and now part of the Executive Education program.

• In fall 1919, the school announced that Ulderico Cornelio, a business student already teaching a first-year course in Italian in the College of Liberal Arts, would teach commercial Italian in fall 1920. In June 1920, Cornelio became the first graduate of the School of Business Administration; he had received a degree in commercial science from the Superior Institute of Commerce, Milan, Italy, in 1911.

• Local automaker H.H. Franklin endowed the Franklin Chair in Transportation in 1920, creating what became the Franklin Center for Supply Chain Management, the first of what today are the school’s 12 centers and institutes.

• The Master of Science in accounting was introduced in 1944 in response to the need for better systems of financial and cost control during World War II. Until 1948, the school’s master’s programs required undergraduate degrees in business administration. That changed with the creation of the MBA program in 1948. 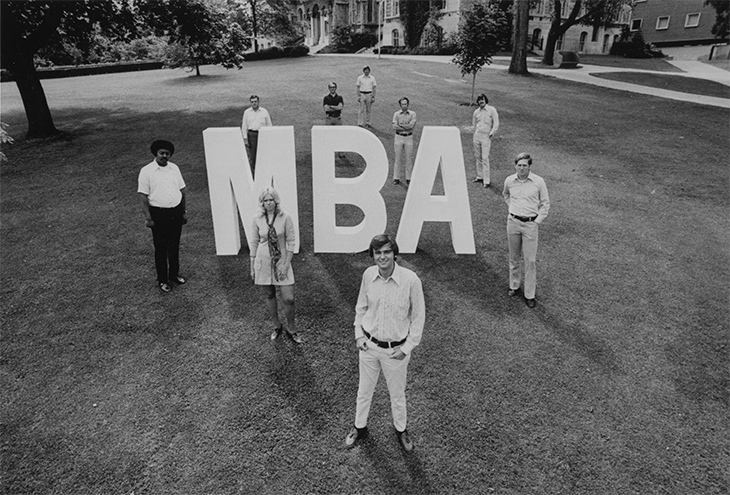 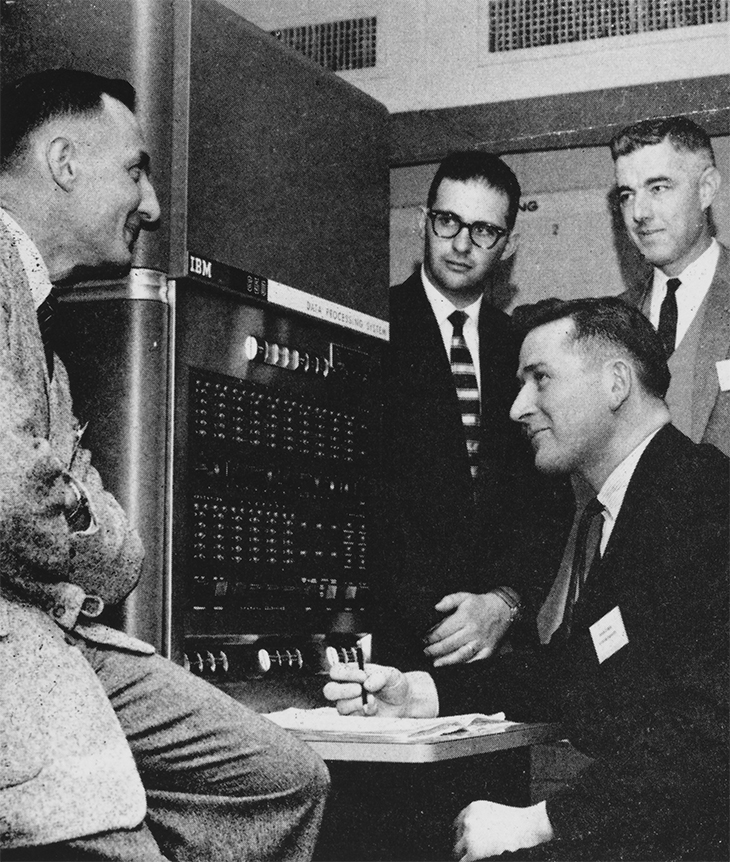 • In 1969, all management students were required to take a business data processing course that introduced them to IBM 2741 console
terminals installed across campus — Selectric typewriters in a small-desk-size cabinet that communicated at 134.5 bits per second.

• The Ballentine Investment Institute was established in 1992, followed in 2006 by creation of the Orange Value Fund, now a $4.5 million hedge fund. 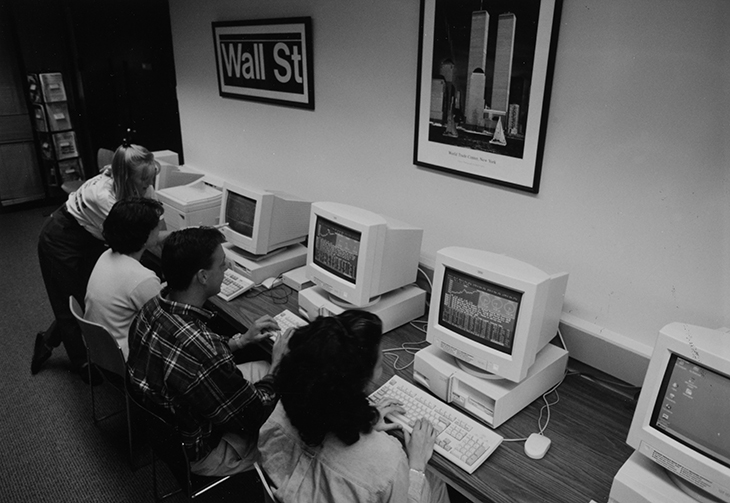 • The commitment to the military, already more than 50 years old,
expanded in 2007 with the first Barnes Family Entrepreneurship Bootcamp for Veterans with Disabilities, offering training in entrepreneurship and small business management for post-9/11 veterans with service disabilities. It’s been expanded to women veterans and families of veterans.

• Distance learning, which started with an MBA program in 1977 (rebranded as iMBA in 2001), was enhanced in 2014 with creation of the a partnership between the school and education technology company 2U and establishment of MBA@Syracuse. By 2016, online master’s programs included BusinessAnalytics@Syracuse, Entpreneurship@Syracuse and Accounting@Syracuse.

• From its earliest years, the school sought to provide its students more than professional expertise. “Each graduate of the college is expected to be an effective worker, an effective citizen and a believer in the ideal that his life shall mean much more than the mere making of money,” wrote Charles L. Raper, the school’s second dean (1921-1943).

• Introduced in 2014, the Goodman IMPRESS program updated these standards to provide undergraduates a competitive advantage throughout their lives and careers. It helps students develop self-awareness, confidence, resilience, strong communication and social skills, plus the ability to synthesize classroom content into a broader, global context.

• Were it not for the persistence of John H. Wharton ’11, the School of Business Administration would not have been created in 1919. A professor of English, Wharton did not succumb when Chancellor James Roscoe Day initially turned down his proposal for a business administration program. Wharton persevered, asking the Chancellor for “a desk and chair,” which were granted, in the administration building’s stockroom.

• In 1920, the school became the 16th collegiate business school in the nation accredited by the Association to Advance Collegiate Schools of Business, which was founded in 1916.

• By 1921, having grown to become the second-largest degree-conferring unit of the University, the school was reorganized into the College of Business Administration and gained more space in what was then the Slocum College of Agriculture building.

• A new undergraduate curriculum introduced in 1946 broadened required courses and introduced the case system to develop decision-making skills. The Elements of Production course, using Harvard Business School material, was the first of its kind for undergraduates in the country.

• By the late 1960s, the faculty understood that management skills were vital to all organizations, not just businesses, a concept that led to the renaming of the College of Business Administration as the School of Management in 1970. This new approach to teaching management led to more combined programs in disciplines, such as architecture, human development, industrial engineering, Latin American studies and nursing.

• The dream of a building for the School of Management dated from the school’s first years. Chancellor Day had promised students their own new building in the early 1920s, but it took a lead naming gift from the Crouse-Hinds Foundation in 1979 to ignite a successful fundraising campaign. Ground was broken in 1981. The 60,000-square-foot Crouse-Hinds School of Management Building opened in 1983. 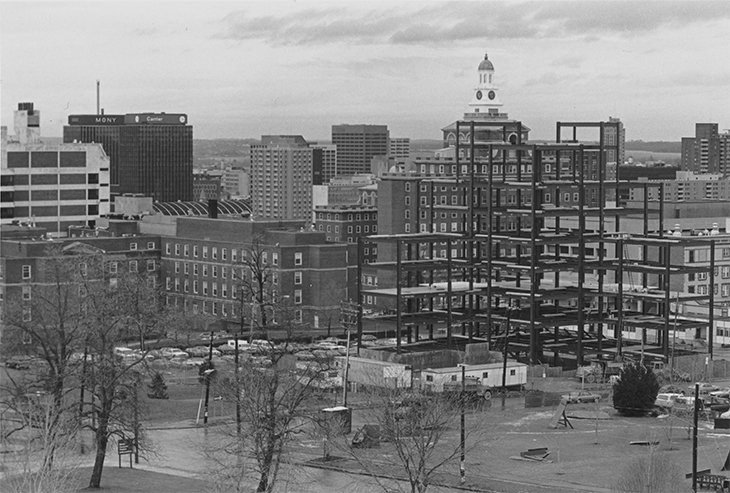 • Twenty years later, the school’s growth demanded a larger facility. Thanks to a naming gift from Martin J. Whitman ’49, H’08 and Lois Whitman in 2003, the current 160,000-square-foot Martin J. Whitman School of Management building opened in 2005.

Take a journey through the Whitman School’s first century, including milestones, celebrations and more, by visiting the digital timeline at whitman.syr.edu/timeline.