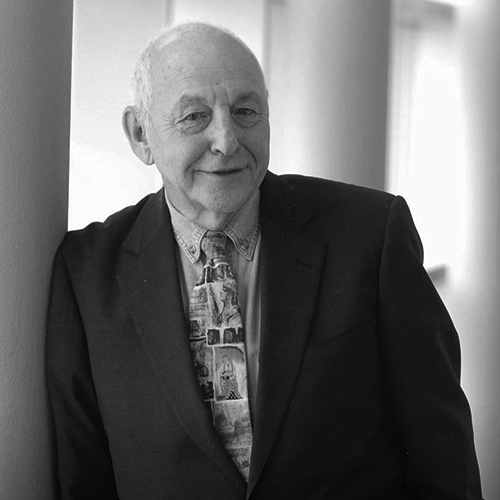 Martin J. Whitman ’49, H’08, an investment industry visionary and generous benefactor to Syracuse University and its management school that bears his name, passed away April 16, 2018. A dedicated mentor and teacher who regularly returned to Syracuse to share his wisdom with students in the classroom, Whitman was an Honorary Trustee at the time of his passing.

The son of Jewish immigrants from Poland, Whitman was a fixture of the Syracuse University community for more than 70 years. He came to Syracuse on the G.I. Bill after serving in the U.S. Navy in World War II and went on to climb the highest echelons of the fiercely competitive field of investment management. In the process, he developed a reputation among his peers in the industry as the “dean of value investing.”

“Marty Whitman represented the very best of a generation that believed in hard work, education and striving for excellence always,” said Chancellor Kent Syverud. “He used his education and his extraordinary intellect to achieve the highest levels of success, and yet he never forgot his humble roots. He was a role model for thousands of students here at Syracuse and elsewhere, and his legacy will live on through them.”

Ten years after opening his own firm, he participated in a takeover of Equity Strategies, an open-end investment company, where he became CEO and president. In 1990, he founded Third Avenue Value Fund, managing it from its inception through 2012 and serving as its chief investment officer through January 2010. He also shared his unique insights and investment savvy as author or co-author of four books, several of which would go on to become industry classics, including “Value Investing: A Balanced Approach,” “Distress Investing: Principles and Technique,” “The Aggressive Conservative Investor” and, his last, “Modern Security Analysis,” published in 2013.

“Mr. Whitman epitomized everything that the Whitman School of Management stands for,” said Gene Anderson, dean of the Whitman School. “His entrepreneurial, insightful and innovative spirit is reflective of our faculty, staff, students and alumni who follow his example in all they do. We are grateful for his many generous contributions of time, talent and treasure. He will be deeply missed by everyone in our community.”

He also had an enormous impact on Syracuse University. In 2003, through the generosity of Whitman and his wife, Lois, the University named its business school the Martin J. Whitman School of Management. With that gift came the creation of a 160,000-square-foot, state-of-the-art building, where today undergraduates and graduates alike gain the knowledge, experience and drive necessary to achieve their career goals.

Elected to Syracuse University’s Board of Trustees in 2003, Whitman frequently taught classes and led seminars as an adjunct faculty member at the Whitman School as well as at Columbia University and the Yale School of Management. He last visited the Syracuse campus 11 days ago to celebrate the 15th annual Whitman Day.

In presenting Whitman with an honorary degree in 2008, Syracuse University recognized him for his extraordinary success, his generous sharing of his expertise and his uncommon humility.

“Martin Whitman was a treasured friend to Syracuse University and especially to the students of the School of Management,” said Board of Trustees chair Steven Barnes. “He took his Syracuse University education and put it to work in a way that led to tremendous success. His achievements helped pave the way for countless students to follow his example as they launch their own careers in the world of business. He will be greatly missed.”