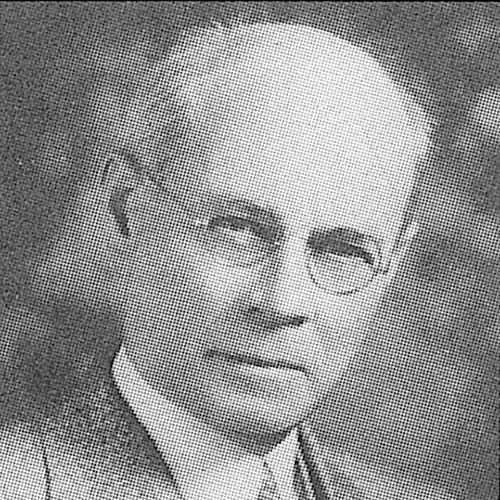 An English major, Wharton graduated with honors from the College of Liberal Arts in 1911 and was immediately appointed an instructor of English in the College of Applied Science. He quickly rose to the rank of full professor and became head of the department. He was appointed dean of the College of Business Administration at the age of 31.

Who knows what the future might have held for John Wharton, had it not been for Holmes Beckwith. Beckwith, a professor of finance and insurance had joined the faculty in 1920. A professional misfit, he had failed at least five other teaching assignments before accepting his appointment at Syracuse. Here, too, he proved inept in the classroom and made few friends in the faculty. In March 1921, Dean Wharton notified him that his contract would not be renewed.

On a Saturday morning in April 1921, Beckwith arrived promptly at 9 a.m. for an appointment with the dean. According to newspaper accounts, he strode into the dean’s office and closed the door. Drawing .38-caliber revolver from his coat, he fired five bullets into the dean’s body, reloaded the weapon and fired a single bullet into his own temple. Both men died instantly.

The headline read “'Entire City and University Stunned by Sudden Tragedy!' Said Chancellor Day, "I am crushed with grief this is a tremendous blow to the University and to me personally. Dean Wharton was destined to immeasurably in the University’s steady and certain progress."

Wharton’s legacy is the enduing conviction that business must be guided by principle, as well as the pursuit of profit. At the first convocation of the College, he told students that they must set a certain tone. He left them with these words: "You can carry into business or into life no greater asset than sound learning and personal integrity."

Bill Conallen
Bill Conallen is a graduate student from Philadelphia, Pennsylvania focusing on public relations at Syracuse University. He is a passionate Philadelphia sports fan and frequent moviegoer always searching for his next favorite film. Bill firmly believes that strong social media and analytical skills are the keys to effective communications strategies.