Scott W. Klein ’79 and Family Share Their Orange Legacy from Coast to Coast

Scott W. Klein ’79 and Family Share Their Orange Legacy from Coast to Coast

Scott W. Klein ’79 was only 11 years old when he visited his older brother, Dennis Klein ’72, over Parents Weekend at Syracuse University in 1968. He had never seen another college campus but, when it was Scott’s turn to apply to college, he had only one in mind.

“What was good enough for my brother was good enough for me,” he says. Scott filled out the paperwork and asked his mother for a check for the $12 application fee, applying early decision. By Thanksgiving of that year, he had his answer, and another member of the Klein family would soon be traveling from their Long Island home to Syracuse University.

While he was initially accepted into a joint program with the College of Arts and Sciences and the College of Law, he changed his mind almost immediately upon arrival. Scott realized he’d be much better off with an undergraduate degree in business, so he transferred to the School of Management as an accounting major.

“What I really wanted to do was start companies and turn struggling companies around on a more successful path, so making the move to business worked out great for me,” he recalls. As a college senior, he ultimately decided against law school and had offers from all the big New York City accounting firms. But, at the last minute, he received a letter from Procter & Gamble, who wanted to interview him for a brand management position. This sounded like exactly the kind of job he wanted, so Scott turned down the accounting firms and went to work for P&G.

That wasn’t the only pivotal moment of Scott’s senior year at Syracuse, however. He remembers the exact day—March 3, 1979—when he took “the girl of his dreams,” Deborah (Miller) Klein ’79 (FALK) out to a movie. “We’ve been together ever since,” he says.

The couple built a life with their three children—all of whom came home from the hospital in Orange onesies—David ’06, Jeff and Eric ’16. The family moved around the country quite a bit, as Scott took on executive leadership positions with companies such as SuperMedia Inc., Information Resources Inc., Electronic Data Systems Corporation, PC Mall Inc. and PrimeSource Building Products. He credits his Whitman accounting degree for giving him much of the foundation that helped him succeed in business over the years. 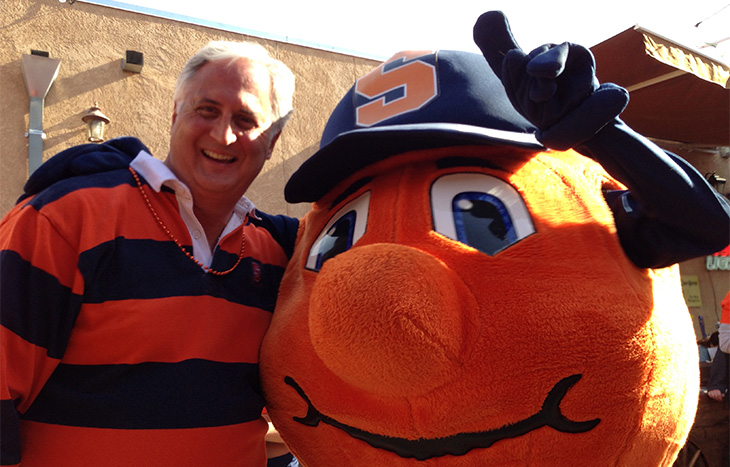 Syracuse University was always present in the Klein home and, while Scott claims he did not push his children to attend, he is clearly proud that two of his sons decided to continue the family legacy.

“I can still remember the day David called to say he got in,” Scott says of his eldest son. David attended the School of Management, too, as did another student named Jacquie (Braun) Klein ’06 (WHIT/NEW), who had, by the end of their first year, become his girlfriend and eventually his wife. Scott proudly remembers the speech Jacquie gave at the School of Management graduation (The Martin J. Whitman School of Management building was under construction during the couple’s senior year). Today, David is an avid investor and Jacquie is a commercial leader and senior director of marketing for The Clorox Company.

Youngest son Eric had a different path to the Whitman School. A stand-out high school football player when the family was living in Texas, he was highly recruited by a number of schools. But an injury changed those dreams and took him instead to Syracuse and the Whitman School. The 6-foot-3 football player was soon recruited by the Orange cheerleading team, something he admits he was unsure about at first.

“But, it turned out to be four of the most amazing years of my life,” says Eric, who was often seen riling up the crowd at the Dome while proudly carrying the Syracuse flag. Eric went on to see the men’s basketball team play in two Final Fours, to make it to the finals of the national cheerleading championship with his team in his senior year and to receive the ’Cuse Award given to an athlete who truly embodies Syracuse athletics. While debatable among his family members, Eric maintains that he is “absolutely the biggest Orange fan” in the family. After graduation, he went to work for Anheuser-Busch but just recently took a position in brand management with Dreyer’s Ice Cream.

While Scott and Debbie’s middle son, Jeff, did not attend Syracuse, opting instead to attend The Ohio State University on an academic scholarship to play volleyball, Eric jokes—as only a younger brother can—that “We still love him and let him come to family events.”

Much of the Klein family now resides on the West Coast. Scott retired in 2010, although he likes to say that he actually “failed at retirement.” He later took on the role of president and CEO for LanguageLine Solutions, a company offering professional interpretation, translation and localization services. He led the sale of LanguageLine to Teleperformance, where today he serves as global president of specialized services. He and Debbie are settled in Carmel, California.

I love helping the students because I know the challenges they are going through. I enjoy lending my expertise as part of the Whitman Advisory Council, as well. I’ve always remained close to the School, and I’m proud that my family has, too.” — Scott W. Klein ’79

Scott has never ended his involvement with Syracuse University and the Whitman School since the days when he was a student emceeing the annual Muscular Dystrophy fundraising event on campus or participating on a committee investigating the feasibility of building the Carrier Dome. (He attended the last game played in Archbold Stadium back in 1978.) Today, he speaks on campus, mentors students and serves on the Whitman Advisory Council.

“I love helping the students because I know the challenges they are going through,” he says. “I enjoy lending my expertise as part of the Whitman Advisory Council, as well. I’ve always remained close to the School, and I’m proud that my family has, too.”

Other members of his extended family feel the same, including brother Dennis, who started the Klein legacy at Syracuse University. Also a graduate of the School of Management, Dennis studied accounting and has a successful accounting firm on Long Island and in Manhattan. Still, he admits that it was his love of sports and his initial ambition to be a sportswriter that led him to Syracuse. “I enjoyed ’Cuse athletics. The tradition of Jim Brown, the football program, those were big draws for me,” he says.

Dennis was an athlete at Syracuse as a member and captain of the rifle team. “I had a chance to travel and it was a lot of fun. We were state champs,” he recalls. “Before a big exam, I would go to the rifle range on campus and clear my head.”

Of course, he remains a big Syracuse sports fan. Now splitting his time between New York and Florida, he can often be found on the links with orange golf balls that say, “Go Orange!”

Other members of the extended Klein family with Syracuse ties include Alyssa Bethea ’20 (FALK), G’22 (SOE) and Blake Herschkowitz ’22, who is studying marketing management at the Whitman School.

While Scott has remained active with the School, he hasn't been on campus lately because of COVID-19 but hopes to soon see the newly renovated Dome and engage directly with students. In the meantime, he continues to enjoy his family, including three grandchildren, one of whom arrived in February. And, like any good grandfather and Orange alumnus, he just might give them a little nudge in the direction of Syracuse University, where his eldest grandchild, Lauren, could continue the Klein family legacy as a member of the Class of '37.