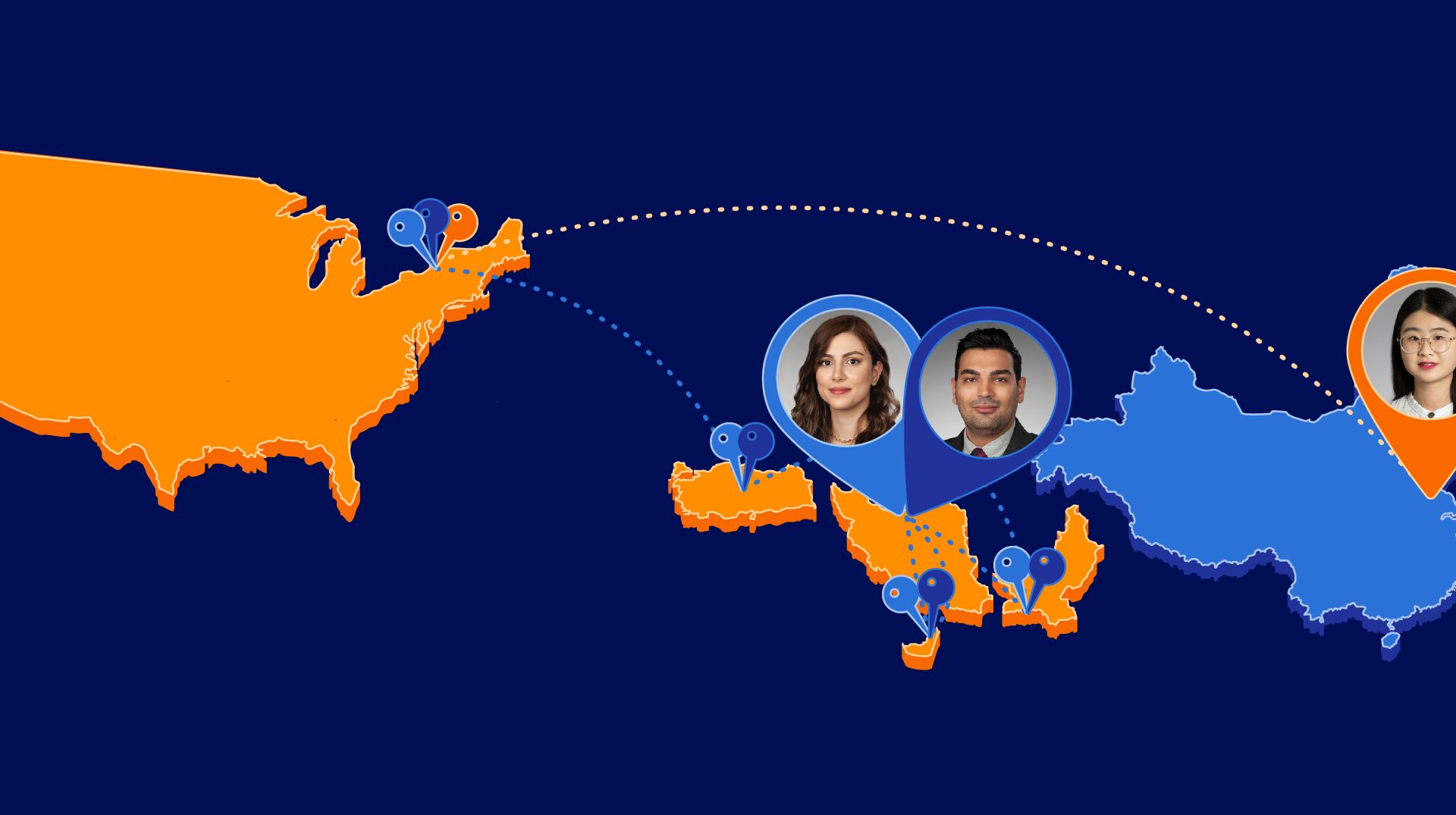 New Ph.D. Students Show Strength in the Face of Adversity

New Ph.D. Students Show Strength in the Face of Adversity

Moving to a new city and starting a Ph.D. program can be challenging under the best of circumstances. But for three international students, the COVID-19 pandemic turned the journey to the Whitman School into a lengthy, nerve-racking and costly odyssey.

For more than a year after the coronavirus began to upend lives across much of the world in March 2020, Wenxin Zhang from China, and married couple Ghonche Khalaj and Ali Kozehgaran, from Iran, struggled to make their way past geopolitical, public health and bureaucratic hurdles to begin their studies in the United States. Their stories are testaments to the resilience, determination—and luck—that ultimately brought them to their destination.

In February 2020, Zhang’s joy at receiving her acceptance letter from Whitman was great, but short-lived. When the native of Nanjing, a city in Jiangsu province, applied for a visa to the United States, the process was soon shut down as the extent of the pandemic became apparent the following month.

A graduate of the master’s program in management science at the University of Science and Technology of China, Zhang was eager to get started preparing for an academic career (she hopes to return to China to teach) and working with the renowned faculty at Whitman, whom she had learned about from a friend. “I felt nervous,” she says. “I did not know when the visa application would be reopened.” It took more than a year, during which, fortunately, she was able to participate in Whitman classes online.

As late as the summer of 2021, with a visa and an expensive plane ticket in hand, Zhang lived in uncertainty for several more months as flights were being canceled regularly, including hers. After rebooking in August 2021, she finally made it to Syracuse.

Ghonche Khalaj and Ali Kozehgaran, for their part, knew going in that obtaining their visas would not be without challenges, since the United States has not maintained an embassy in their country since the Iran hostage crisis of 1979. But they could hardly have predicted the financial and emotional toll the process would extract from them or the dedication it would teach.

Both had spent much of their lives in Iran’s capital, Tehran, only leaving to obtain their undergraduate degrees in industrial engineering, which Kozehgaran earned from Shiraz University of Technology while helping to expand his family’s apparel distribution company, and Khalaj completed at Tafresh University.

Each was enrolled in a master’s program in Tehran—Khalaj at Tarbiat Modares University and Kozehgaran at Sharif University of Technology—when they met at a gathering for industrial engineering students. It didn’t take long for them to realize how much they had in common.

“We had been doing almost everything together, participating in classes, studying, learning a new programming language,” says Kozehgaran.

For their next steps, they decided to move to the United States together to pursue doctoral degrees. “We have been each other’s best friends and biggest supporters,” says Khalaj. “Now everything was conditioned on getting admitted into the same university. This was our biggest challenge.” Or so they thought.

Whitman—which caught their attention thanks to its notable faculty, dedicated students, first-rate research facilities, wide range of research opportunities and location in New York State—fit the bill and accepted both Khalaj and Kozehgaran to pursue their interests in finance and marketing, respectively.

First, they had to make an appointment with a U.S. embassy in one of three neighboring countries, Armenia, the United Arab Emirates (UAE) or Turkey. They chose Armenia as the most cost-effective. “Everything was perfect for a short time, and we were so happy that finally we can reach our dreams and be together,” says Kozehgaran.

But when war broke out between Armenia and Azerbaijan, all visa appointments were canceled for the next two months in all three countries. The couple’s application fees and travel costs were lost. Still, they considered themselves lucky. “A lot of students like us didn’t have any other options and lost their admissions,” he explains.

Then, due to rising COVID cases in Iran, all neighboring countries closed their borders, making the couple’s situation appear hopeless. They credit assurances from Michel Benaroch, associate dean for research and Ph.D. programs at Whitman, that they could defer their admission for a year, alleviating the worst of their stress.

Toward the end of the summer, Khalaj and Kozehgaran decided to try their luck in the UAE. It took writing an official letter to two Iranian ministries to obtain negotiated permission from the UAE to enter Dubai for 14 days of mandatory quarantine and the interview at the U.S. embassy. Two cohorts of students successfully made the trip, but before the couple could get on the plane, COVID cases rose sharply in the UAE and their permission was withdrawn. Again, they lost significant sums of money.

Two more months passed before the news that an Iranian medical student had received a visa in Karachi, Pakistan, renewed their hope. The problem this time: They had to be on Pakistani soil to deposit the interview fee in person. “We took the risk and paid $1,000 each for a round-trip flight to Karachi,” Khalaj says. After a two-week quarantine, they finally completed their embassy interview on Nov. 27, 2020.

The ensuing clearance process took 110 days, a period that passed with relative calm—only to be followed by a two-week mad dash.

“Our marriage and everything related to it depended on getting our visas, because Kozehgaran would have had to complete his mandatory military service and not work otherwise, and we might have had a hard time covering the wedding expenses,” Khalaj says. “In Iran, couples are not allowed to live together without being officially married. So as soon as we got our visa, we planned and did almost everything for a memorable wedding in only 15 days.”

They negotiated a complicated schedule of four countries’ quarantine mandates, visa requirements and religious holidays to leave Tehran, pick up their visas in Karachi, spend a waiting period in Turkey, and finally arrive in the United States at the end of June 2021. “We were out of Iran for more than two months before getting to Syracuse, but as we were a newly married couple, we had such a great time in Istanbul,” Kozehgaran says. A few weeks later, their classes began.

A New Life in Syracuse

So has all the trouble been worth it? The answer from the doctoral students is a resounding “yes.”

Khalaj and Kozehgaran have been impressed with Whitman’s friendly and welcoming atmosphere as well as the academic opportunities the School offers. “Moreover, compared to my friends’ situations in other universities, Syracuse University and the Whitman School provide lots of amenities for better living conditions for their students,” Kozehgaran says.

Zhang mirrors their joy at being here, though not without a tinge of regret. “It is excellent,” she says. “I feel pity that I could not come here earlier.”

In the meantime, the students have settled in comfortably and ventured out to discover their new surroundings. Khalajand Kozehgaran  especially enjoys hiking and camping and exploring small villages around Syracuse. Zhang has found Green Lakes State Park a favorite spot and enjoys watching wildlife around the city. Coming from a humid, subtropical climate, she has only found the cold to be a bit of a challenge, though she enjoys skiing. “I have had to buy a very thick down jacket,” she says.

All three students expressed a deep sense of gratitude, not least for the support they received at Whitman throughout the ordeal. “At home, my mother helped me a lot, and at Whitman the faculty and Dean Benaroch made many adjustments for me,” Zhang says.

Moreover, compared to my friends’ situations in other universities, Syracuse University and the Whitman School provide lots of amenities for better living conditions for their students.” — Ali Kozehgaran

Khalaj and Kozehgaran also relied on Juan Tavares, director of the Slutzker Center for International Services. “He made many things easier for us,” Kozehgaran says. “We believe we are so lucky that we are not only studying at the same university but also our favorite school.”

Getting to this point was a journey full of valuable lessons. “We understand each other better, are more patient during hardships, and can handle unprecedented situations better,” Kozehgaran says. “Most importantly, we realized that we have to fight for what we want. The only one who is responsible for our future is ourselves.”