A second-year MBA student, Justin Cuddeback, is looking forward to Graduation Day and life beyond, come summer. Until now though, his hopes and dreams were slightly tainted with the uncertainty of the economic situation that has surrounded us for quite some time. Mr. Dudley, however, put some of his concerns to rest and he emerged from the intensive session a better-informed and -equipped student.

Dudley spoke about a number of different topics, from a holistic national standpoint, all the way to current economic outlook of Western New York. He maintained a position of optimism throughout the entire presentation, although occasionally alluding to the uncertainty of the US’ current economic situation. Participants of the lecture, including myself, were anxious to hear his thoughts on the FED’s decision to maintain the Government asset purchase program. Dudley, in favor of the continued implementation of the $85-billion-dollar bond-buying endeavor, cited two specific reasons as to why he favors continued Government support. Although the labor market is showing signs of growth, it is not nearly as far along as the FED had hoped it would be at this point in time, indicating the first reason why the program would not be altered. Additionally, not only would the labor market need to grow at a promising rate, Dudley insisted that it would need to show that it had the strength and sustainable growth to endure over an extended period of time. Until that is perceived as true by the FED, there is no intention of changing the program.

As far as the economic conditions of upstate New York, Dudley was once again uncertain but optimistic. He was uncertain because the manufacturing sector in Syracuse, an industry that had once thrived in New York, now struggles even more so than the national average. However, he remained optimistic the sector was showing signs of a shift from foreign to domestic. Additionally, he referred to Western New York’s prominent position in the healthcare and education sector as motives for citizens to remain at ease.

From a graduate student on the hunt for post-graduation employment perspective, I really took to heart what Dudley said when he completely shifted gears from the economic outlook, to the importance and value of a good education. Especially someone who is currently and will continue to search the job market, Dudley’s passion about the true value of an education did not fall upon deaf ears. While he backed up his claim with studies conducted by the FED that have shown that students who survive college are on track to attain the career of their “dreams”, the real testimony was the man standing in front of us. Dudley is convinced that persistence along with capturing opportunity when it comes, are two critical keys to success in the job market. I felt proud knowing that my continued work ethic and determination to seek employment would not go unnoticed, and that eventually, I too could reach the culmination of success similar to what President Dudley had worked so hard to achieve.

To conclude, I loosely quote President Dudley himself, “A good job is one that allows you to build your own human capital. When the ability to do that runs out, it’s time to move on.” He is living proof that building your own human capital will indeed result in the outcome you desire, regardless of what that desire may be. 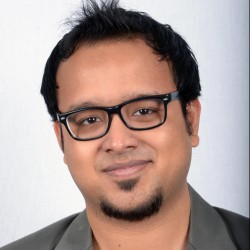 Aishik Barua
Aishik Barua is a 2nd-year MBA student concentrating on media marketing. He is particularly in love with TV shows (from The Sopranos to The Flash), books (from The Little Prince to the Harry Clifton series) and a myriad number of modern era conspiracy theories. When he is not screwing his eyes at some website's Google Analytics page, he could be found doodling with his sketch pencils, cooking a new dish or simply engaging in general goofiness.