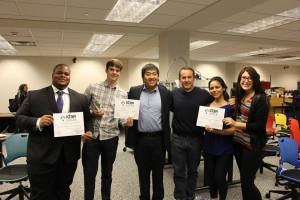 EEE Read All About It!

An IDEA juicer is a Shark Tank type of presentation open to students from all across campus. Earlier this semester four teams were invited to be finalists at the juicer competitions. Three of these teams represented EEE students in different programs.  Whitman School of Management undergraduate students Gabriela Escalante and Hannah Fagut (BS ‘15) pitched a new business concept that came out of their Launchpad class. They developed a working prototype of their product, which is a T-shirt with LED lights that activate with sound.  One prototype had a festival logo in LED lights that lit up to the music.   Their customers are music festival operators who will buy the shirts to sell to their patrons as a way to increase concession sales. Gabriela and Hannah won $500. Other notable students include MSE (’15) student Kean Clifford who won $500 for his custom fishing lure business that mimics three different types of movements that attract predator fish.  The money will be used to improve his manufacturing process and reduce his variable costs so he can make more money on his current orders.  Jimmy Zheng (MBA ’15 with EEE concentration) pitched his idea for fast casual sushi. The judges liked his idea but since but did not see that he needed the money as much as the other students because he was further along than the others.

Doug Messer, a student in the EEE program has raised $300,000 in capital from angel investors for his company University Beyond. Doug has been working in the Couri Hatchery. More information about the capital raise and University Beyond can be found here.