Elisabeth “Lisa” Fontenelli ’86 well remembers a summer internship with a media company that introduced her to working daily in a high-energy, corporate environment in New York City. She enjoyed the experience and, ultimately, it sparked her interest in a career on Wall Street. But there were also challenges: It was unpaid and required a four-hour roundtrip commute from her home in New Jersey.

“It was a hardship, but one I could bear, and I thought it was worth it,” says Fontenelli, a Syracuse University trustee and chair of the Whitman School of Management Advisory Council. “But for a lot of students, it’s a hardship that makes those types of opportunities inaccessible.”

As part of the Forever Orange campaign, Fontenelli has committed a $1 million gift to the Whitman School to help, among other things, establish a semester-long program in New York City that features experiential learning opportunities and is open to all Whitman students.

“We’d like to create accessibility for students who don’t see a lot of people like themselves in those environments,” she says. “It’s for women and students of color but also truly for all students who don’t have a role model or a leg up to try to understand what the New York City environment is like.”

“Lisa’s keen understanding that a Syracuse University education goes well beyond the classroom setting and that cost and logistics can be a barrier for students is truly an expression of her leadership, for which we are tremendously grateful,” Chancellor Kent Syverud says. “She is determined to open doors for promising students in New York City.”

Whitman launched a pilot of the Whitman in NYC program in spring 2020 and plans to build it out over the next few years. The program will provide a mix of industry-related coursework, internships and professional experiences. These include mentoring relationships with Syracuse alumni, shadowing opportunities and networking, exposing students to different lines of work in the investment banking and financial services industry and allowing them to explore what appeals to them. “Often the most valuable things you learn are what you don’t want to do,” Fontenelli says. “You may also hit pay dirt and decide, ‘Wow, what I’m studying is something I can do and love!’”

“I am deeply grateful to Lisa for making this leadership gift in support of our Whitman in NYC initiatives,” says Dean Gene Anderson. “While we already have courses, a study abroad experience, career exploration trips and networking events, we have the potential to do so much more to provide transformative educational experiences for our students. This gift sets us on a solid path to do just that.”

Fontenelli says that experiential learning is valuable, noting that while students pursue an academic path that builds their expertise in a subject, there isn’t always a clear, accessible path that guides them in putting that knowledge to work. She says it’s important for students to learn how they can create value and have their talents leveraged by an organization, as well as what the work environment and people are like and whether the work will give them satisfaction.

LISA’S KEEN UNDERSTANDING THAT A SYRACUSE UNIVERSITY EDUCATION GOES WELL BEYOND THE CLASSROOM SETTING AND THAT COST AND LOGISTICS CAN BE A BARRIER FOR STUDENTS IS TRULY AN EXPRESSION OF HER LEADERSHIP. SHE IS DETERMINED TO OPEN DOORS FOR PROMISING STUDENTS IN NEW YORK CITY.” —Chancellor Kent Syverud

Fontenelli, who earned a dual bachelor’s degree in marketing management and telecommunications management from Whitman and the S.I. Newhouse School of Public Communications, considers herself fortunate that she found a fulfilling career path. She spent three decades on Wall Street, including 25 years with Goldman Sachs. She retired from there in 2017 as a partner and global head of securities research, overseeing all of the firm’s equity and credit research. Throughout her career, Fontenelli hosted students from Syracuse University and other higher education institutions worldwide, introducing them to her research team and its work.

“One thing that has always impressed me about the Syracuse students is they’re kind of scrappy,” says Fontenelli, whose brother, Robert Fontenelli Jr. ’88, is a College of Arts and Sciences graduate. “As a body, they’re incredibly hard-working and earnest, which I think is what spurs the entrepreneurialism that is so prevalent in so many parts of campus.”

Fontenelli’s commitment to the University runs deep, especially when it comes to providing opportunities and guidance for students. She’s been involved with Whitman’s Stuart Frankel New York Stock Exchange Scholars Program and the University’s Washington, D.C., spring immersion program, participated in panel discussions on women in finance, served as a judge in the Orange Tank entrepreneurial competition and spent countless hours meeting with students on campus.

As chair of the Whitman Advisory Council, Fontenelli supports strategic initiatives spearheaded by Anderson and wants to see the school continue to move up the rankings, distinguishing itself from competitors through offerings that will prepare students for the evolving business world of the 21st century. She also calls for alumni support to achieve those goals, whether through a financial donation or sharing time and talent via mentoring, networking, internships and other learning experiences.

“The Whitman in NYC Fund is open for your investment in creating accessibility for these types of learning opportunities for our students, so they can be the next generation of Orange in the world,” she says. “You can do a great service to our students as they forge their career paths.” 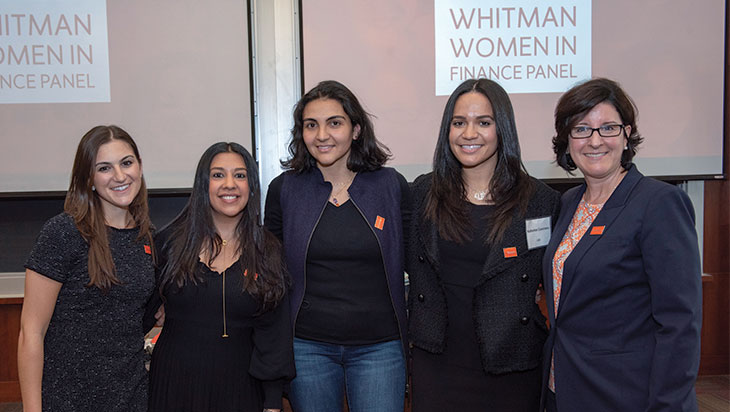 George S. Bain
George S. Bain is a freelance writer/editor and former copy editor for the Syracuse Newspapers. He holds an M.A. in public administration from the Maxwell School (2006).
Latest posts by George S. Bain (see all)
Skip back to main navigation