The Whitman School aims to inspire and prepare students for an ever-changing business world. For these reasons, each semester dedicated staff and faculty work closely with alumni, donors and industry partners to create and facilitate experiential programming that bridges the gap between classroom learning and practical application, all while expanding job placement opportunities and assisting students to build meaningful connections.

“To achieve our strategic goals, the Whitman School is constantly improving our experiential learning offerings and creating new experiences that integrate into our curriculum. A focus of these efforts recently has been on programming in central hubs of business progress and innovation, such as New York City.” – Gene Anderson, dean of the Whitman School.

Home to many of the country’s top companies, leading industry professionals, a population of more than 50,000 Orange alumni, countless recruiters and two Syracuse University facilities, the New York City metro area is a unique educational landscape close to campus filled with a wealth of opportunities for students, made accessible through the Whitman School. In early January, more than 130 undergraduate and graduate students could be found taking advantage of the Whitman School’s NYC-based winter break programming. Such opportunities included the annual Janmester real estate course, a newly developed entrepreneurial deal-making course, job shadowing and three in-depth career exploration trips for students interested in marketing, finance or retail. 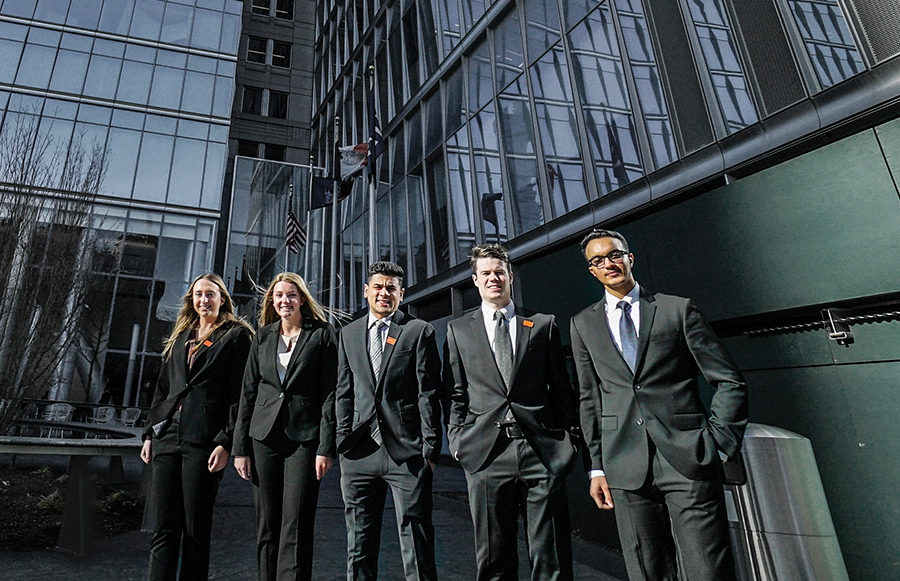 Students outside of Citi.

According to Alexander McKelvie, associate dean for undergraduate and master’s education and chair of the Department of Entrepreneurship and Emerging Enterprises, although some short courses offered by other schools and colleges allow students to rapidly earn credits, many lack immersive elements.

“Learning is increased when students can apply their knowledge into real-world settings,” said McKelvie, who collaborated with John Torrens, professor of entrepreneurial practice, to create the new entrepreneurial deal-making course. “Students need to see concepts they’ve learned in action, practically use them in relevant situations and hear from industry experts in order to have a truly well-rounded educational experience that reinforces classroom learning.”

“We are going to offer more of these intensive courses on important topics to provide students with transformational learning experiences while also allowing them to meet their graduation requirements,” said McKelvie. “With the way the Whitman School curriculum is designed, we have the opportunity to deliver novel content outside of the traditional semester system and in exciting locations.”

Another beneficial aspect of these courses is that participating students work together in a diverse classroom environment. In entrepreneurial deal-making, Whitman undergraduate students worked with students from both the on-campus and online MBA programs. The result was a rare mix of students of different ages and levels of work experience.

“I loved meeting alumni, learning about different industries, meeting people who might help me in my career, [hearing] great stories,” said Belle Martorano, a student in the MBA@Syracuse program. “It’s just really been a wonderful experience.” 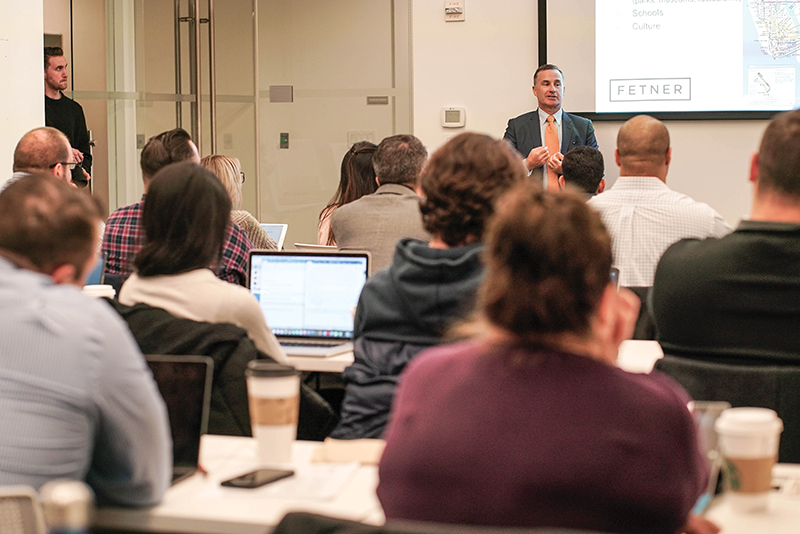 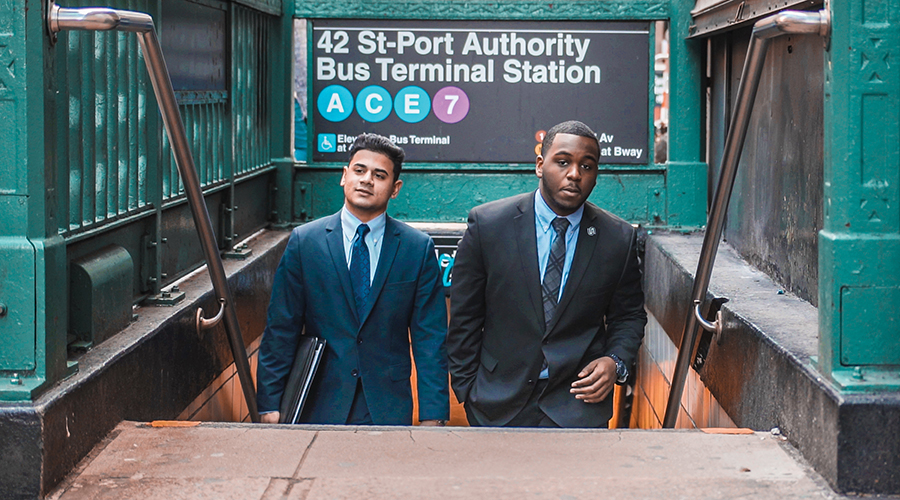 Students come out of the subway in New York City.

“By the end of the deal-making course, we saw our more experienced MBA students asking to work with the undergraduates. I believe that the different student groups came to see the value in the unique contributions and insights of the others — the students with 15-plus years of industry experience were learning from those just about to start their careers, and vice versa,” said McKelvie.

While some students were busy in their courses, other students were adjusting to the hustle and bustle of the NYC streets and businesses as they took part in job shadowing and career exploration trips.

For more than 10 years, the Whitman School has offered the finance and marketing career exploration trips to NYC for sophomores and juniors. This year marked the third year the Retail Road Trip has been available. These two- to four-day trips give students an insider’s view into their fields of interest and a platform to candidly ask questions of employees and working alumni about their day-to-day jobs, living in NYC and the application of classroom material in a real-world setting.

Some highlights from the trips included visits to offices, including Bloomberg, NBC Universal, WeWork, Bank of America, Citi, Ross Stores and others, as well as a networking event for students and alumni, and a finance discussion with Charles T. Goldberg ’77, first vice president and financial advisor at the Fortress Group at Morgan Stanley.

An evening networking event brought all of the students attending the three exploration trips together with more than 70 alumni representing leading brands in finance, retail and marketing for an opportunity to practice networking skills and expand their career connections. 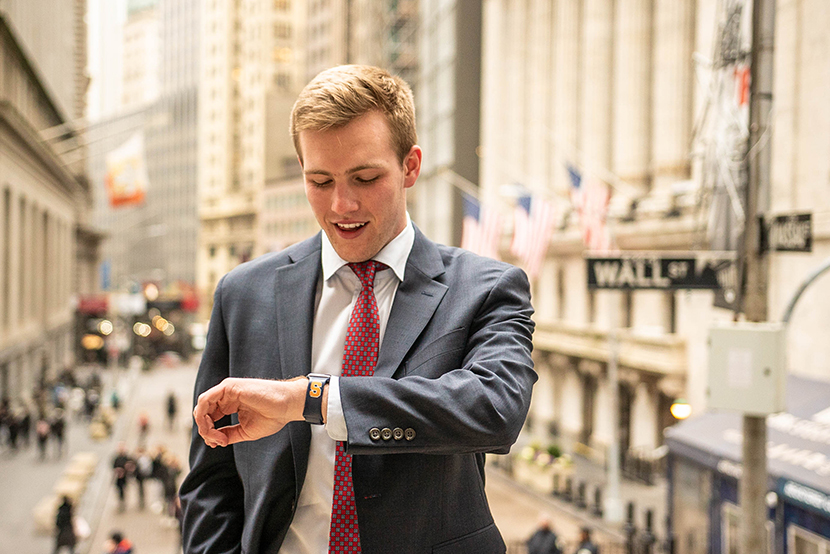 Scott Mueller '21 looks at his Syracuse watch on Wall Street

According to Scott Mueller ’21, a finance and marketing dual major at the Whitman School, attending the career exploration trip made him more confident in his decision to study finance.

“I always knew I wanted to be a finance major, but I had barely any exposure to the industry before I went on the Whitman on Wall Street finance trip,” said Mueller. “During our trip, we learned about sales, trading, investment banking and asset management. The trip gave me insight into what finance really is, and I’m even more excited to pursue my major and work in the field after graduation.”

“The career exploration programs are a powerful way for our current students to immerse themselves in learning about their potential future career paths,” said Kara Primrose, director of Career Services at the Whitman School. “The company visits and networking reception would not be possible without the dedication of our alumni who give generously of their time and mentorship.”

To Mark Hebert ’05, executive director of investment grade credit trading at Morgan Stanley, who hosted an office visit as part of the finance exploration trip, these opportunities are an invaluable service to students.

“I think these career exploration trips, especially at the sophomore level, really help students explore different fields in financial services so that they can start to figure out the things that they either like or don’t like at an earlier age,” said Hebert. “That way, when they are considering internships their junior year, they might have a better idea of what field they want to go into versus just applying to something.”

Hebert was also one of 35 alumni to participate in Whitman’s job shadowing program, which paired 23 students with alumni from companies such as Macy’s, PwC and Fetner Properties. The alumni gave students a first-hand perspective into the job responsibilities, business operations and corporate culture.
“You’re getting to meet a lot of alumni who do different things, and I think meeting them on this kind of personal level offers a chance for the students to comfortably ask questions and learn about what the alumni do day-to-day,” said Hebert.

“Having the opportunity to job shadow actually helps solidify my decision on what I want to focus my future on, and I get to have a sense what I am able to do with my future and see what I can do now to prepare for my career,” said Tiffany Wong ’21, who is studying studying finance and planning to double major in marketing. 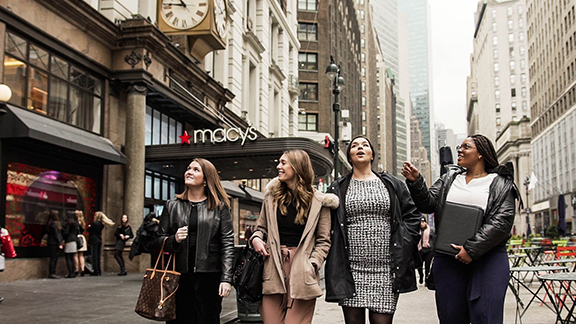 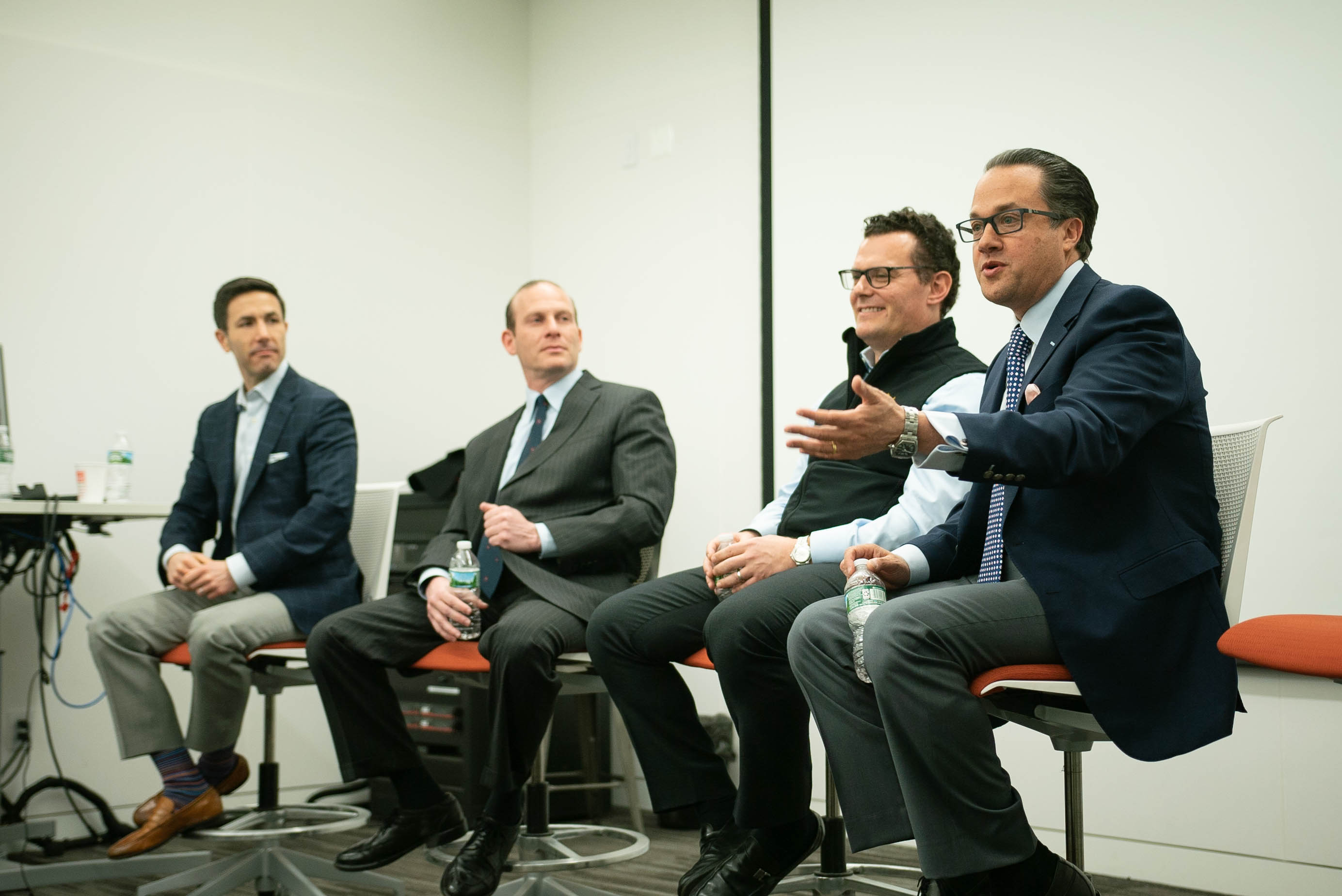 Alumni participate in a panel discussion.

Wong accompanied Melinda Rivera ’15, an integrated marketing manager at IFC, a television channel owned by AMC Networks, throughout her daily responsibilities. According to Rivera, she gives back because of her experiences at the Whitman School, and the invaluable connections she made through meeting alumni helped her get to where she is today.

“During the Marketing Exploration Trip, I met an alumnus, Chad Bender, who was working at ABC Family, before it was rebranded to Freeform,” said Rivera. “After our conversation, I quickly realized that being in the entertainment industry was something I really wanted to pursue. Using the business and networking skills the Whitman School provided me, I stayed in contact with Chad and kept myself top of mind by simply asking to have coffee to learn more about his job, requesting a job shadow and even sharing TV industry news and trends I found interesting and wanted his take on. Because of those continued conversations, I was able to secure an internship at ABC Family, and then later after graduation I secured a job there as an integrated marketing coordinator.”

Christopher Grant ’12, ’13 M.S., acquisitions and development associate at Fetner Properties and member of the Young Whitman Advisory Council, had a similar experience after meeting Hal Fetner ’83, Syracuse University Trustee and president and CEO of Fetner Properties. Grant first met Fetner in New York during a Janmester week, was the recipient of the Fetner Prize for Sustainability in the Panasci Business Plan Competition and later was offered a position. Grant, a highly engaged alumnus, spoke to students in the deal-making course in NYC in January and hosted two students as part of the Whitman job shadowing program.

“Syracuse University alumni are always willing to talk to students and give them their advice,” said Grant. “Students should take advantage of reaching out to alumni, even if it is just to hear their story and maybe take away some inspiration on potential career paths for them.”

According to many students like sophomore Ian Meier, the experiences and lessons learned during winter break in NYC have made them more prepared for potential careers.

“No classroom could have provided the knowledge that this trip  did,” said Meyer.

With more programming in NYC to come for Whitman students, including a joint experiential learning course with the School of  Architecture being launched this summer and a Whitman  in NYC abroad program on the horizon, Anderson is looking forward to seeing these immersive opportunities further enhance the Whitman experience for students and prepare them for a world of rapid change.

“None of these unique learning opportunities would be possible without the generous support of our staff, faculty, alumni, donors and partners,” said Anderson. “With their continued commitment, the future of business will be bright, and it will be Orange.” 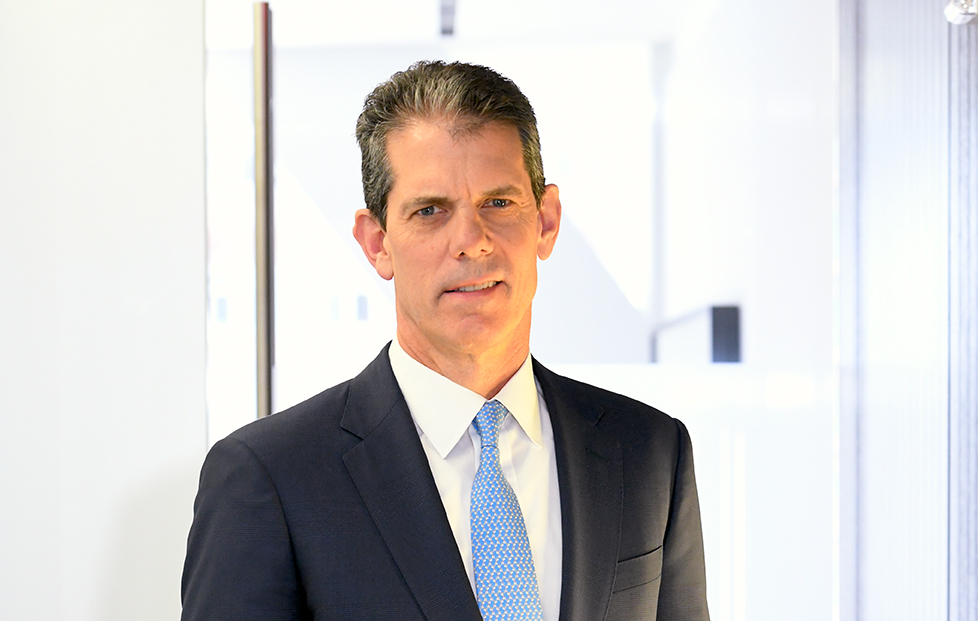