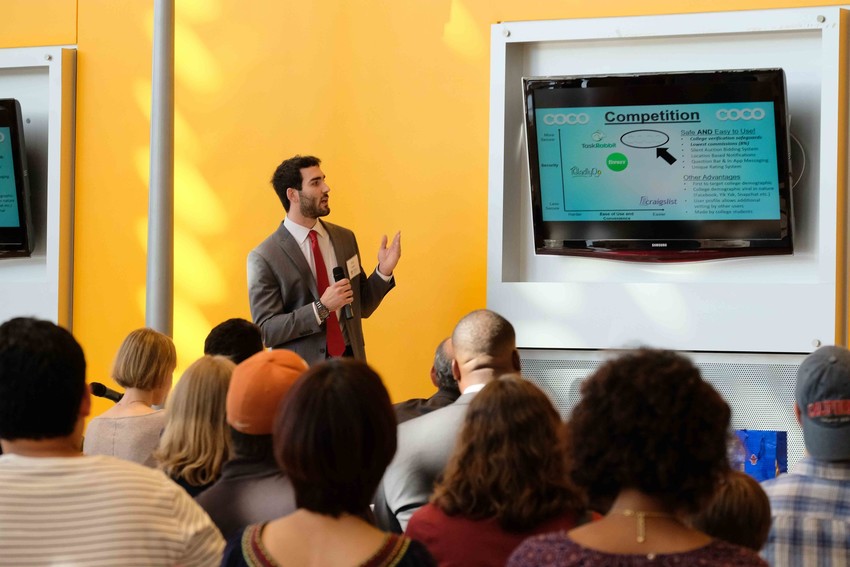 During Orange Central weekend, Martin J. Whitman School of Management student and alumni entrepreneurs came together to compete in the second annual Orange Tank business pitch competition. Five alumni ventures and five student ventures were presented to a panel of judges in hopes of taking home a cash prize. The top winner in each category was awarded $5,000 followed by $3,000 for second place and $1,000 for third place.

Whitman’s Phil Rossi ‘17 and Dan Strumlok ‘16 took first place in the student competition for their business COCO (College Connection). COCO is an app that allows users on college campuses to easily exchange services, such as tutoring and ride-sharing, amongst each other. Users can post jobs, request services and earn money in their spare time throughout the school year. According to Strumlok, the prize will be used to help launch the app.

“Our next goal is to successfully launch the app and get as many college students on board so we can help them save time and earn money,” said Strumlok. “It’s nice to see someone’s idea for a business come to fruition. This wouldn’t have been possible without the environment at Syracuse University. Students come in with ideas and they are given access to lots of resources and opportunities.”

The Campus Cause, a student discount business, took second place in the student competition, while Metropolitan Soles, an online sneaker boutique, took third.

On the alumni side, Tamara E. Cohen ’09 and Holly Tassi ’10 won first place for the venture Ag for Africa, a social enterprise for Sub-Saharan Africa. Ag for Africa is an export-oriented development model that aims to commercialize the Bambara groundnut, a sustainable market substitute for soy in food and beverage production. Through building partnerships, Ag for Africa is helping build a better infrastructure for farmers to reach international markets.

“Orange Tank allowed us to gain the validation and confidence we need moving forward as we begin participating in higher stakes competitions,” said Cohen. “It was a great opportunity to pitch in front of a qualified panel and have judges raise important issues we must consider moving forward. We’re so grateful to have the seal of approval from the judges and the Whitman community.”

Whitman brought together a panel of Syracuse alumni business experts to judge the competition, including:

Roland Williams ’97 (VPA),  former NFL football star, served as the master of ceremonies. He was a key part of the legendary “Greatest Show On Turf” offensive unit featuring Quarterback Kurt Warner and Running Back Marshall Faulk that broke numerous records en-route to a Super Bowl 34 victory. Since retiring from the NFL, Williams has continued his winning ways as a father, philanthropist and one of the top team building and performance experts in the world.