Reflection on the Lockerbie Ambassadorial Program

A few weeks ago, I had the opportunity to participate in the London-Lockerbie Ambassadorial Program, an exchange visit to Lockerbie, Scotland, to learn more about the significance of Pan Am Flight 103 and the connection that formed between Syracuse University and the Lockerbie community. Before the visit, I knew about the story of the flight and Remembrance Week on campus, but I hoped to walk away with a deeper understanding of what happened that day and what has happened since, not just at Syracuse, but in the town of Lockerbie as well.

On our first day, we spent time with students at the Lockerbie Academy. I enjoyed speaking with the younger students, who told me all about school and life in Scotland, and students closer to my age, who wanted to learn more about living in America and the Lockerbie Scholars program. As we walked around the school, I noticed many plaques and memorials about the flight and Syracuse University. I realized immediately how strong the relationship was between the Lockerbie Academy and Syracuse, and I will never forget the kindness and hospitality with which we were greeted.

The next day, we went on a Remembrance tour with first responder Collin Dorrance, one of the officers on the scene following the crash. This was a very emotional part of the visit, as Dorrance told us details about the explosion and personal stories of people affected by the flight. I could not imagine what it was like for the friends and family of the 270 victims of the flight, especially the 35 Syracuse students who passed away, and it was difficult to walk around various memorials in Lockerbie without tearing up. We spent time at the Lockerbie Air Disaster Memorial and Garden of Remembrance and had the opportunity to place flowers at the front of the memorial. After reading visitor logs and seeing the number of flowers, gifts, and letters at each location we stopped at, I could tell how important each memorial was to those affected by the flight, and my admiration grew for the resilience of the Lockerbie community and all the ways they showed respect to the victims. We then had a community dinner with Lockerbie Scholars, Syracuse alumni, and Lockerbie locals. It was a night of laughter, tears, and reflection on what we had learned and seen.

The ambassadorial program was an incredibly moving experience, and I was so fortunate to be with my peers, Syracuse faculty and alumni, Lockerbie Scholars, and the Lockerbie community to hear more about and reflect on what happened. It was beautiful to see how the victims are still being honored today and how the bond between Syracuse University and Lockerbie has continued to blossom, year after year. I will never forget the stories I heard, the people I met, and the places I saw, and I left the small town of Lockerbie with new perspectives on and deeper understanding of Pan Am Flight 103 and the power people have to grow and rebuild their communities after tragedy. 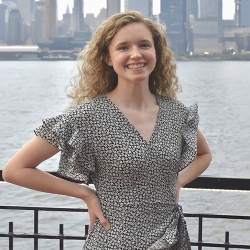