This summer, not only did 25 military veterans complete the 2022 Entrepreneurship Bootcamp for Veterans (EBV) program offered through the Syracuse University D’Aniello Institute for Veterans and Military Families (IVMF), but, for the first time, alumni of the program were invited to the Syracuse University campus to join in the celebration and mark the 15-year reunion of an initiative that has helped 2,300 veterans start and grow their businesses. 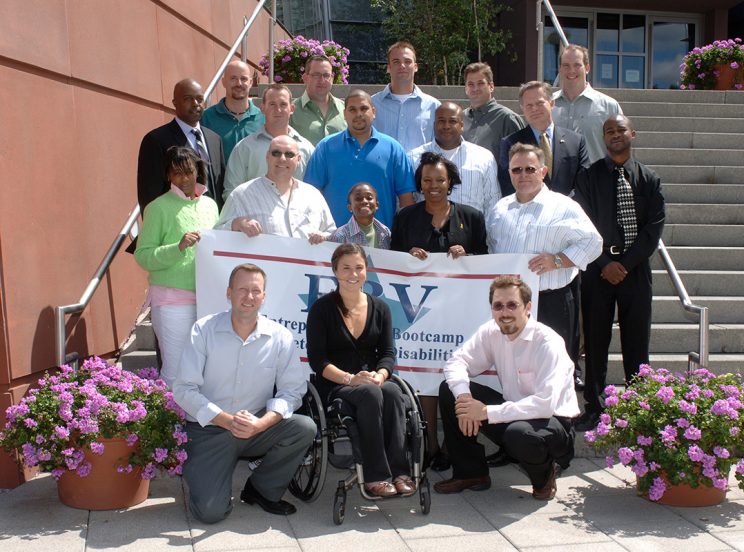 The EBV grew out of an idea from J. Michael Haynie. A former Air Force officer when he joined the Whitman School to teach entrepreneurship in 2006, Haynie, who today holds the distinguished title of university professor and is also the executive director of IVMF, the Barnes Professor of Entrepreneurship at the Whitman School, and the vice chancellor for strategic initiatives and innovation at Syracuse University, wanted to help veterans with disabilities transition into civilian life by turning many of the skills learned in the military into opportunities through formal, experiential business training.

The program almost never came to fruition. Haynie pitched the idea to former dean of the Whitman School, Melvin Stith ’73 MBA, ’78 Ph.D., himself a Vietnam veteran, who was supportive. However, both Haynie and Stith didn’t feel it would be right to charge veterans for the program, so the decision was made to raise funds to cover the $120,000 needed for the program. Fundraising was slow at first, and, in the first few weeks, Haynie had only raised $20,000. Fortunately, WWII veteran Marty Whitman ’40, H’08, wrote a check to cover the $100,000 gap. In addition, the chair of the University’s Board of Trustees at the time, Steve Barnes ‘82, H’19, chair emeritus, and his family made an additional gift to endow the EBV program, ensuring it could be offered in perpetuity.

Fifteen years later, the EBV program is going strong, not only on the Syracuse University campus but at seven other consortium schools around the country, including UCLA, Florida State University and Texas A&M University. As of 2020, graduates of the program have generated over $480 million in revenue through entrepreneurship. Seventy-nine percent of EBV graduates have started or continued to grow their own business, and 92% of those are still in business.

The program has become so popular that there are currently more applicants than seats. Any post 9/11 veteran with an honorable discharge is eligible to apply through Syracuse University. Those selected are assigned to programs either at the University or one of the other participating schools. To complete the one-year program, each veteran must participate in a 30-day online course focusing on the fundamentals of business. Many of the instructors are from the Whitman School and volunteer their time. Participants are also required to attend a nine-day residency at one of the schools. After the EBV program is completed, veterans receive 12 months of ongoing support to help their businesses grow. The entire program is completely paid for by generous donors, so the veterans do not incur any costs to attend, including travel or lodging. 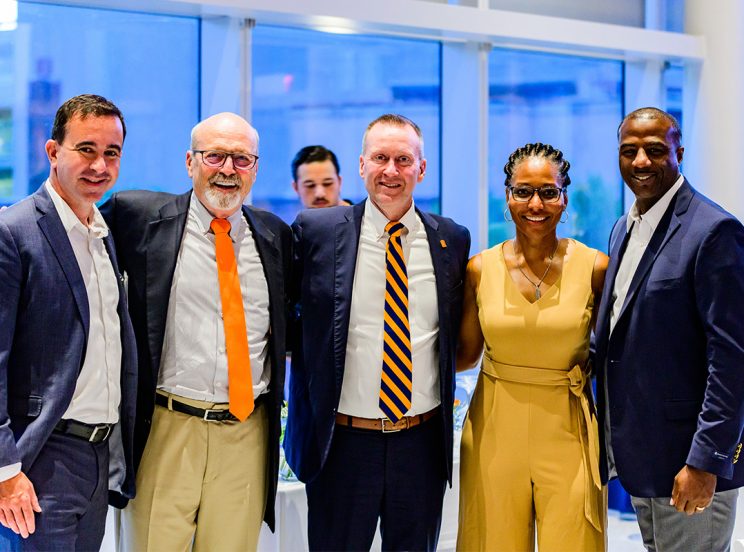 One such donor who made the 15-year anniversary possible is Ted Lachowicz ’72, a graduate of the School of Management and founder and president of the Entrepreneurship Bootcamp for Veterans Foundation (EBV-F). Lachowicz challenged alumni of the program to match a $20,000 donation to secure funding for the celebration. Three EBV graduates, Kelo Makelele, JJ Taylor and Bennett Tanton, responded with matching funds. Soon, alumni of the Syracuse University program, as well as a number from within the consortium, were on campus to mark the occasion and participate in a weekend of networking, learning and celebrating. Members of the 2022 cohort not only marked the completion of the EBV program but had the unique opportunity to interact with those who came before them -– and hear the stories of their success.

“The EBV has its roots in the Whitman School, and what started as an idea 15 years ago has grown into a nationally acclaimed program that is central to Syracuse University,” says Interim Dean of the Whitman School Alex McKelvie, who also participates annually as an instructor in the EBV program. “Seeing the growth of those who have served our country and witnessing them accomplish their entrepreneurial goals is really something satisfying. Having some of them return to campus to share their experiences was an added bonus.”

Haynie agrees. “I’m a veteran and an entrepreneurship professor at the Whitman School, so this program lives at the intersection of two passions for me,” he explains. “The EBV program has the power to change lives, communities and families. It started as a way to give those traumatically wounded in Iraq and Iran a chance to overcome obstacles in the workplace and define a career that could accommodate those with disabilities. That core idea has been driven home to me every year since by the outstanding graduates of this program, and seeing those who’ve just completed the process interacting with those with proven success was really special.” 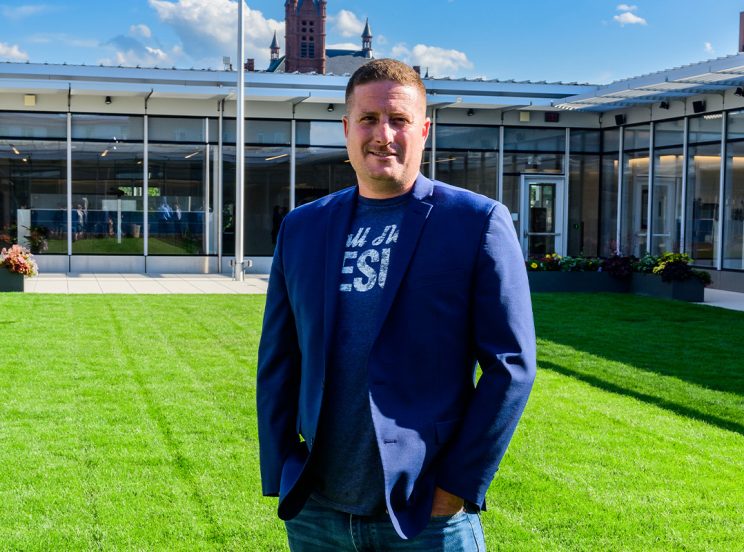 One such success story is Chris Dambach. After serving in the United States Marine Corps as an infantryman, he returned to civilian life in 2012 with an idea to start his own lawn mowing service. In 2013, he was accepted into the EBV program, and today his company, Industry Standard USA, is one of the initial Certified Disabled Veteran-Owned Small Businesses in the state of New York, providing construction and facility/ground services to prime contractors and the state and federal government. Not only is Industry Standard USA one of the fastest growing veteran construction companies in Central New York, but this year it also made Inc. 5,000’s list of fasting growing companies.

“Back in 2013, the EBV program quickly showed me that I didn’t know much about growing my business,” Dambach explains. “It was an eye opener that taught me things like cash flow statements and how to launch true marketing campaigns, while also surrounding me with other veterans who were carrying out the mission to grow and start their own businesses, too.”

Dambach was proud to be invited to the 15-year reunion. He says, “It was a pretty cool feeling to be in a room with so many other successful entrepreneurs and be able to also help motivate those just completing the EBV program by saying, ‘If I can do it mowing lawns, then you can do it with your company.’”

While this is the first time EBV alumni were formally invited back to campus, it won’t be the last, according to Haynie, who is looking toward the future. “We are currently focusing on how we can innovate and bring on new programs to serve the changing needs of those who came through the program in the early years. We need to continue to support them, while we also continue to welcome a brand new group of veterans into EBV each year,” he explains. “We’ve accomplished so much in 15 years. What will we accomplish in the next 50?”