In his more than 35 years at the Whitman School, Peter Koveos has witnessed how globalization and technology have changed teaching.

In his first semester in 1982, Koveos — now professor of finance, Kiebach Chair in International Business and chair of the Department of Finance — stood on the stage of Hinds Auditorium in front of 250 students who were trying to read what he wrote on the blackboard.

“We used good old chalk. We did not even have a microphone,” said Koveos. “In addition, I happened to have sprained my ribs, so trying to make myself heard was quite a challenge. The students, however, knew my predicament and were very cooperative.”

Classroom technology, features and platforms, such as PowerPoint and YouTube, revolutionized teaching. Discussion has increased as lecturing has waned.

“You can’t just depend on classroom lectures and the textbook to ensure that you made your point. You need to put together an approach that in- corporates how students today learn,” said Koveos, who teaches courses in finance, international business and the Chinese economy. 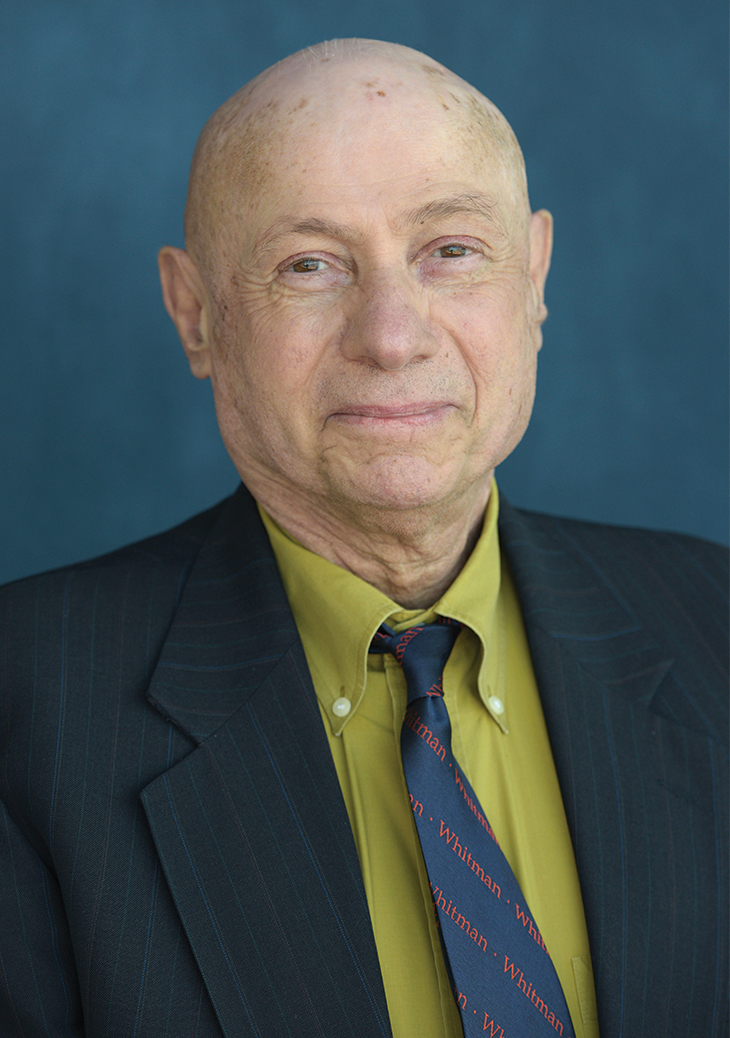 As a senior Whitman faculty member, Koveos has compiled a distinguished record. With a Ph.D. in economics from Pennsylvania State University in 1977, he was hired in 1982 when what was then the School of Management was housed in Crouse-Hinds Hall. After Dean L. Richard Oliker’s retirement. Koveos served as the school’s interim dean from 1988 to 1990. He has also served as Whitman’s associate dean for MBA programs and senior director for international programs. He is director of the Olivia and Walter Kiebach Center for International Business and editor of the Kiebach Center’s Journal of Developmental Entrepreneurship. In 1998, his work in China was recognized by the Municipality of Shanghai; he received the Magnolia Award given to outstanding foreign experts. 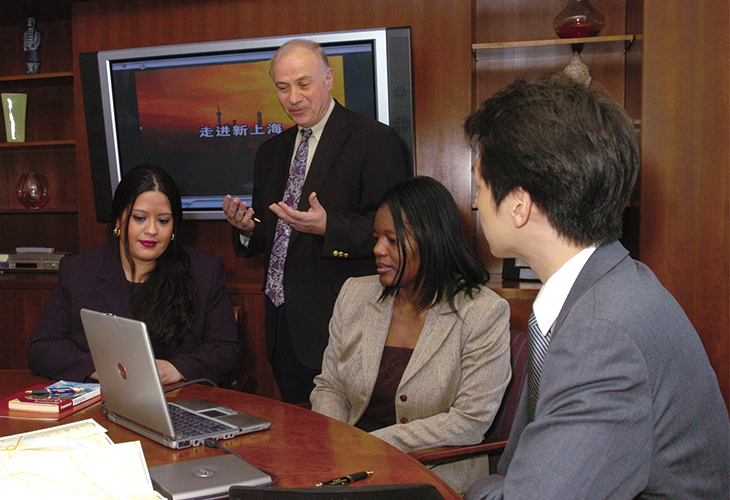 Traveling the globe may be the best classroom for today’s business students.

“Our students will be living and working with people from many cultures. The sooner they learn to respect other cultures, the better off will they be. And there is no better way to do that than actually go there," Koveos said.

To that end, he has led Whitman students on trips to China for nearly 30 years. He first visited China in the early 1990s.

“I immediately realized the depth of Chinese civilization and China’s importance to the new world. I wanted our students to experience China and all it has to offer to their own understanding of the world,” he said.

The easy rapport between Chinese students and American students struck him on the first trip he led with Syracuse students. “The two student groups felt very comfortable with each other and uncovered that, beyond their obvious differences, they had many similarities,” he said.

The easy rapport between Chinese students and American students struck him on the first trip he led with Syracuse students. “The two student groups felt very comfortable with each other and uncovered that, beyond their obvious differences, they had many similarities,” he said. 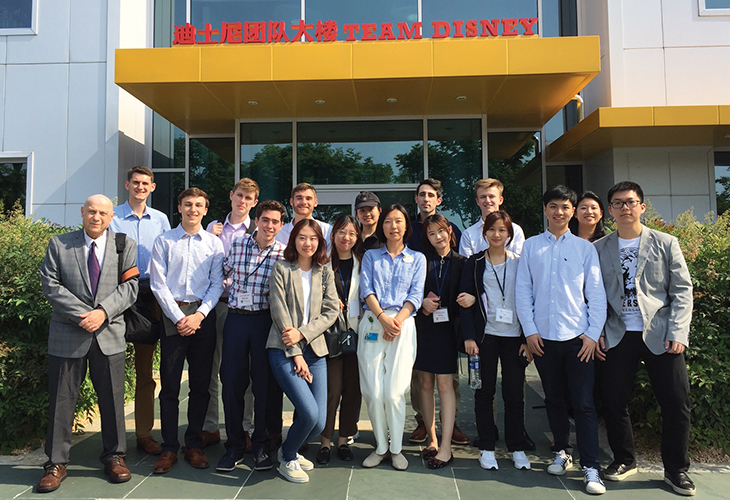 In May, Koveos took 15 Whitman students on an immersion trip, meeting with alumni and visiting companies to learn about Chinese culture and business. The students were mostly first and second-year undergraduates.

“I was excited about that,” he said. “I want their China experience to come as early as possible during their stay at Whitman.”

Formation of the Kiebach Center for International Business Studies in 1990 was another step in what Koveos calls “the need to internationalize the school.” He credits the effort and vision of the Kiebachs (Walter graduated from Syracuse University in 1936) and former deans Oliker, George Burman and Mel Stith.

“We have placed special emphasis on working with small and medium-sized companies that are interested in expanding their international presence. In so doing, we have also offered our students the opportunity to work with these companies and learn the basics of international business,” Koveos said. 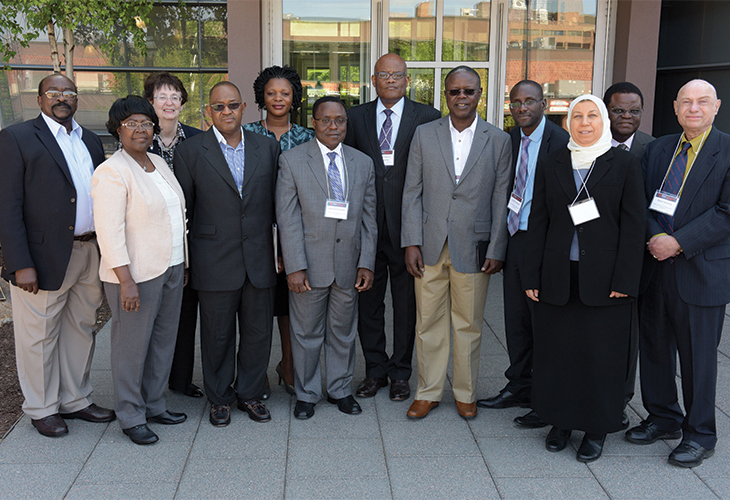 Seven years ago, Koveos and former Whitman School finance professor Pierre Yourougou established the Africa Business Program in the Kiebach Center. That made the Whitman School one of the few American schools with a program focused on Africa’s business environment, Koveos said. The program works with academic institutions in the United States, Canada, African countries and Empire State Development to promote greater understanding of Africa among students and New York state businesses.

A believer in a university’s obligations to its wider community, Koveos was a co-founder of ExportNY, serving as executive director since 1998. ExportNY’s program — an interactive course on global business development — combines classroom training, market research support, tools for analysis, and resources. Participants meet twice a month at Syracuse University for four months.

“The work of students within the ExportNY framework illustrates the way in which business education has been transformed,” Koveos said. “There is a lot more emphasis on meaningful experiential learning that is also connected to what students learn in their programs of study.”

In 20 years, ExportNY has trained managers from over 120 companies. Whitman students are assigned to work with each of these companies, gaining exposure to their practices and culture.

The Whitman School’s students are adept at dealing with globalization’s challenges, Koveos said, since they have never lacked confidence.

"Globalization and technology have made today’s environment more complicated and competitive than ever before. Students must then be more flexible and willing to adapt to the changing circumstances in which they find themselves,” he said. “Whitman students, then and now, however, have always been confident in their ability to excel in their career.”

The students and faculty have always been hallmarks of the Whitman School, Koveos said, praising his colleagues. “In addition to their commitment to students, the school and to their own professional development, they represent a rich diversity of cultures and backgrounds,” he said.

Loyalty to the Whitman School and Syracuse University is vital. “Our current students and alumni bleed Orange,” he said. “Everywhere you go, whether it is the U.S., China, Taiwan, Korea, India or other places where our alumni now live, you will find a group of loyal alumni. They stand ready to support the school any way they can.”

The most significant impact of that loyalty was when the late Martin J. Whitman ’49, H’08 made the naming gift to the school and the new building opened in 2004.

“Naming it after someone who has been a leading professional and a wonderful human being has motivated all of us to set a higher standard of performance,” said Koveos. “It has been much more than a symbolic change in the name of the building.” 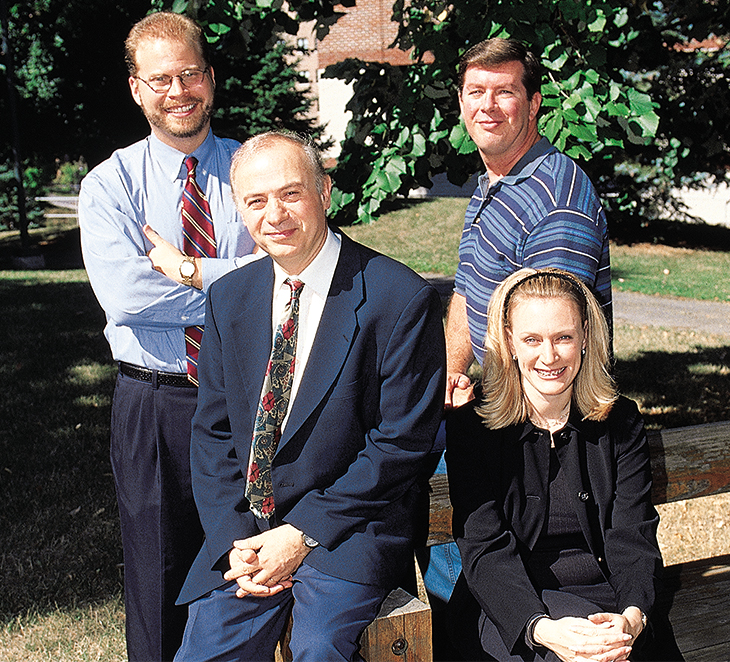