Guest Post: From Kansas to NYC, A Unique Learning Opportunity

Here’s a fun fact: you’re currently reading a blog post written by a Syracuse University student who is from Kansas! When you read the word “Kansas” there are probably a lot of pictures that flash through your head including, but not limited to: cows, corn, farms, riding horses to school and no shopping malls. (I was asked once, by a girl from a small town in Oklahoma, if we had a mall in Wichita, Kansas. Those who know Wichita know we have TWO malls!) According to Google and the United States Census Bureau, in 2013, the population of Wichita, Kansas was 386,552. Another quick Google search told me that Wichita is the 49th largest city in America based on population. I tell you all of this not to brag about Wichita, but to inform you that we are not a small town like most people tend to think.

However, no matter how large I might think Wichita is, it is nothing compared to the extremely populous New York City at 8.406 million. NYC is the largest city in America, much larger than the measly 49th largest city – Wichita. I also attended Oklahoma State University in Stillwater, Oklahoma, which in 2013 had a population of 47,186 (that was probably measured during the school year). I tell you all of this for one simple reason: this smallish-town boy spent the summer of 2015 in New York City, and it was quite the culture shock.

During the summer of 2015, I was fortunate enough to intern with Atlantic Records, which led me to step way out of my comfort zone and live and work in NYC. The majority of the people in the USA have lived in much smaller cities and towns than the largest city in America. Those that are reading this who have spent time in NYC but are not from there can understand exactly where I am coming from.

I subleased a room in the Bronx, which is definitely something I never thought I would be able to say. Regardless, I lived in a house with about ten roommates. I say “about” because I could never actually figure out how many people truly lived there. About halfway through the summer, I was still meeting people who lived there and was almost kicked out of my house because someone did not recognize me. I would say that throughout the summer there were anywhere from eight to fourteen people living in my house at any given time.

I worked on 50th and Broadway, which is by far the craziest thing I thing I have ever said. I worked in Manhattan—along with 8 million other people. I remember my first day, laughing while walking to work because I was so taken aback by the fact that I was in NYC. My first week was crazy, too. I could not find my way around the city; I got lost running an errand and refused to take the subway because I could not figure them out. My first night I ate street meat on the side of the street, and I only ever took one subway line because that was my line and I was afraid of getting lost. I was a scared little Kansan stuck in a quick moving and intense city.

Parallel the above description of my first week with whom I became over the course of my stay in NYC. (See the video proof.) Like the hit musical Newsies, Big City Dave became the King of New York. He figured out that the GPS on his phone showed him which subways to take and where to transfer. He spent three hours in line to see a recreation of the Seinfeld set. He was able to attend the Nathan’s Hot Dog Eating Contest in Coney Island on the Fourth of July with his mother. He went to shows, met famous people, and ate a lot of pizza – a lot of pizza.

Overall, the main idea I want to convey to those reading and those leaving their comfort zones is this: you will adapt and you will be fine. I was absolutely terrified when I found out I was going to be living in NYC—I’ll be the first to admit it. The key takeaway from this summer was that I can adapt to a scary situation and I can then thrive on the new knowledge I have developed. I am now no longer afraid of visiting NYC; I can navigate myself around the streets like a champ. I am now ready to visit any other city in America; they will all be smaller than NYC at least. Take me overseas; NYC is the eighth largest city in the world and I can handle this. So the moral of my sporadic story is: step out of your comfort zone, you will not regret it. 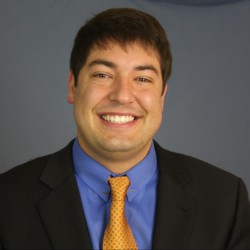 David Hahn
David Michael Hahn is a third year JD/MBA student at Syracuse University.He has a great passion for acting, music, and traveling and hopes to incorporate one or all of those in his future life. In his spare time, David likes to play music in his band "The Sexy Deck of Cards," watch television and watch and play sports.