Building a successful career in real estate is all about forming relationships. It’s a lesson Jeff Grasso ’09 learned during his days as a double major in finance and accounting at the Whitman School of Management, and one he is passing on to current and future students with his recent gift to the school.

Grasso, a senior vice president and head of acquisitions at Silverstein Properties in New York City, is funding a financial modeling boot camp for students to help them master the skill seen as a key factor to make them stand out as job applicants.

Relationships are everything in business. They dictate who people want to work with, invest with, transact with.”

“Relationships are everything in business,” says Grasso. “They dictate who people want to work with, invest with, transact with.” He’s used his relationship skills over more than 10 years with Silverstein to complete $8 billion of real estate transactions across debt and equity strategies throughout the United States, Europe and China, including opening the firm’s offices in both international locations.

Relationships result from three traits, according to Grasso: trust, credibility and confidence. “This can mean different things for different people, but I distill it to having a moral compass and always doing the right thing,” he says.

“Without me building relationships with those three gentlemen, I would not be in the same position I am today,” Grasso says. “Dean Foley was my mentor at Whitman, who took me under his wing and introduced me to Jimmy and Hal.”

He credits an internship for Kuhn — president and head of investor services of Newmark, the fourth largest global real estate brokerage firm in the world —with creating relationships that helped him get his first job at a hedge fund and an analyst position at Silverstein.

Fetner, CEO of Fetner Properties, “would always spend time with me every time he came to Syracuse. He tried to show me the ropes of the business, not just from a technical standpoint, but from a social/ relationship standpoint,” Grasso says.

Relationships pay off over time. Grasso recalls how it took two years of networking in Poland to acquire the Ethos office and retail building in Warsaw’s Trzech Krzyży Square, which he calls the Fifth Avenue of Warsaw. He learned the anchor tenant, which occupied the entire building, was vacating, and the owner was a fund that shunned taking much risk on active real estate business plans. 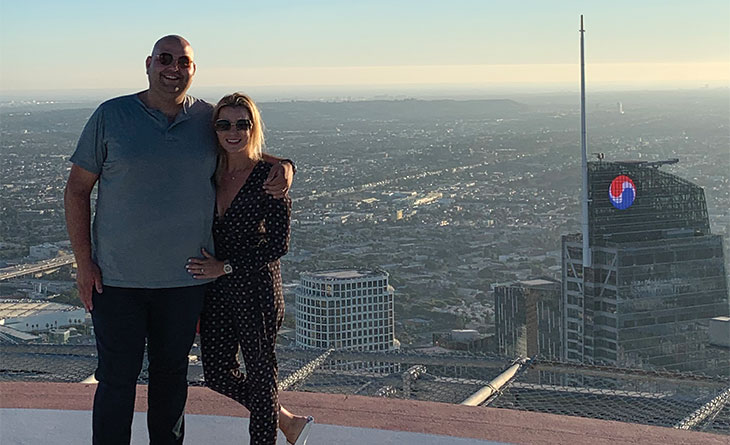 “I convinced the seller we were the most credible group to buy the property and was able to convince them to do so on an off-market basis, without a broker, because of the relationship we built over those two years,” says Grasso. He got the seller’s bank to restructure the existing loan and provide below-market financing to purchase the property and redevelop it to cater to luxury retailers and blue chip office tenants.

Paying it forward motivated Grasso’s gift to the school.

“My professional career has immensely benefited from the generosity of Jimmy Kuhn, Hal Fetner and Dean Tom Foley. I only hope to honor them by continuing their mission at Whitman,” he says.

Mastering financial modeling will help students obtain internships during their Whitman years, according to Grasso, who had internships after his first three years at the Whitman School, at a regional bank and then a regional developer — both in New York’s Hudson Valley — before his internship at a Kuhn real estate investment company.

Grasso’s gift fits the needs of Whitman Dean Eugene Anderson and his strategic plan, “getting students experiences out of the classroom to prepare them” for the job market, says Tyler Harding, the school’s director of development.

Financial modeling is a crucial skill for job applicants.

“I will say this as simply as I can: ‘You will not get a job in real estate investments or finance if you are unable to say you are proficient in utilizing Excel and Argus to create advanced and dynamic real estate analyses,’” Grasso says.

Firms do not want to teach employees technical skills, but they are happy to teach you the industry.

“Firms do not want to teach employees technical skills, but they are happy to teach you the industry. Students from top schools competing for the best jobs graduate with this proficiency. This is a lesson to anything you are preparing for in life: understand your competition and execute a strategy to overcome your hurdles to achieve your desired success.”

Grasso says he landed his first job at ING Clarion Capital because he had committed to becoming proficient in advanced real estate analytics during his junior year. “The fund only wanted experienced hires, but I was able to convince them of my professional drive and ability to create advanced real estate models at the same level of analysts who’ve spent two years at an investment bank.”

His advice to anyone starting a career is to “outwork everyone and have a smile on your face while you’re doing it.”

Over the past few years, his role at Silverstein has transformed into creating and executing its investment strategies across all platforms. Silverstein — a privately held, full-service real estate development, investment and management firm based in New York — has developed, owned and managed more than 40 million square feet of office, residential, hotel and retail properties, including the new World Trade Center. His duties include identifying investment theses, forming capital to execute, sourcing potential investment opportunities, structuring transactions, and creating the business plan to be executed after closing.

“One of the initiatives I am most proud of is convincing Larry Silverstein, chairman, and Marty Burger, CEO, to grow our business to the West Coast in 2017,” Grasso says. Silverstein is acquiring U.S. Bank Tower, which, at 73 stories, is the second-tallest building in Los Angeles, and is part of the plan to build Silverstein a $2 billion portfolio between Los Angeles, Seattle, and San Francisco.