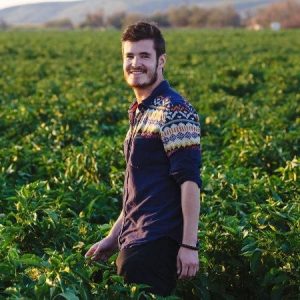 Nate Cotanch ’12 started Zia Green Chile Company in the Fall of 2014 as one of the companies at Brooklyn’s renowned outdoor food market, Smorgasburg, which has been hailed by the New York Times as “The Woodstock of Eating” and by the Wall Street Journal as having a low acceptance rate that “rivals schools like Brown University, which accepts 9.6 percent of applicants.”

Hatch Chile, a crop harvested once per year in the fall, is famously grown only in the Hatch Valley of Southern New Mexico due to its high altitude, dry climate and rich soil. Known for its flame roasted and smoke-kissed qualities, Hatch Chile is a highly versatile ingredient that is deeply rooted in the history, culture, economy and cuisine of New Mexico but rarely known (or heard of) outside of the Southwest. Cotanch, whose roots are from a family of 17 children raised north of Santa Fe, is the first to bridge this gap.

As Zia quickly gained press in Gothamist, the Company attracted a loyal following of New Mexican/Southwestern transplants and New Yorkers, and even partnered with the State of New Mexico’s Tourism Department, Cotanch quit his jobs in finance to bring an entirely new flavor palette to New York City.

Cotanch teamed up with former Syracuse classmate, Elliott Anderson ’12, to grow Zia Green Chile Company in Fall of 2016. Over the past couple years, Zia Green Chile Company has built a cost-effective and reliable system to introduce the seasonal crop to the East Coast via distributing freshly picked Hatch Chile from farms in Hatch, New Mexico, during harvest time and jarred product consisting of roasted, peeled and diced Hatch Chile from each year’s harvest.

Zia’s products, which are free of artificial preservatives, vegan/vegetarian, non-GMO and gluten-free, are available on Amazon and have achieved status of “Best Seller” and “Amazon’s Choice.” Zia Green Chile Company is also now distributed nationwide via some of the top retail and food service distributors into specialty grocery stores and leading restauranteurs.

Zia Green Chile Company has been covered in the likes of The New York Times, Saveur, The Los Angeles Times, Food & Wine, and more, including being named by Every Day Rachael Ray as “One of the greatest new grocery store products” in October 2017. Nate Cotanch was also featured as one of Brooklyn Magazine’s 30 Under 30 for the Class of 2018.

Zia Green Chile Company welcomes you to sign up for the company newsletter to keep track of progress.

Nate Cotanch
Nate Cotanch, a 2012 graduate of the Whitman School with a major in entrepreneurship and emerging enterprises, is the founder of Zia Green Chile Company. Cotanch was featured in Brooklyn Magazine's "30 Under 30" Class of 2018 and in Forbes as “One of 10 Innovators Under 30 Shaking Up The New York Food Scene.” Prior to founding Zia, Cotanch worked in the NYC venture capital scene analyzing early to growth stage ventures across multiple industries.