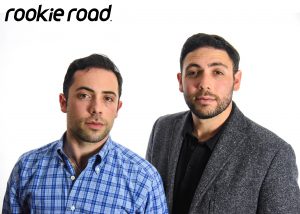 Rookie Road Inc. is a digital media technology company that focuses on sports education. The company creates reliable and quality educational content that will get you motivated to learn something new. Rookie Road is working on innovative ways for people to engage with great content – see its recent football launch announcement here.

Rookie Road, Inc. was founded by Doug Gursha (left) in 2014, while he was studying engineering and computer science at the University of Michigan. He didn’t understand the rules of college football, which is a huge part of the culture at Michigan, so Doug decided to teach himself the basics. Quickly realizing there were no quality resources available for learning sports, he began creating his own platform and content to explain the rules, concepts, and lingo. Thus Rookie Road was born. Through traditional text, photos, videos, interactive diagrams and animation, Rookie Road offers free digital content geared towards helping people learn in a more engaging fashion and also empowering users with limited knowledge of sports.

Mike Gursha is the CEO of Rookie Road and a 2010 graduate of Syracuse University’s Whitman and Newhouse schools. Joining the company as CEO in 2016, Mike runs the day-to-day operations of the business as well as works on building a strategic vision and mission for the company. Before joining Rookie Road, Inc., Mike served as the entrepreneur-in-residence at the Newhouse School at Syracuse University, where he worked with students, faculty and staff on entrepreneurship and innovation. Mike also lectured at Newhouse and other schools on Syracuse University’s campus where he taught a class called New Ventures and helped foster innovation and entrepreneurial thinking.

Mike and Doug recently relocated the company from New York to Portland, Oregon. Portland has a growing technology scene as well as a rich creative ecosystem. In addition, the city is a significant sports hub with companies such as Nike and Adidas North America being headquartered there. Rookie Road is growing rapidly and is currently raising a significant funding round. They intend to hire many more employees this year.

Rookie Road’s American Football tutorial recently launched, with basketball coming in mid February. Baseball, Soccer, and Ice Hockey are also set to be released in early 2018. Users can access all the basic digital content for free, and Mike anticipates Rookie Road offering other premium content and features in the next 12 to 18 months.

Doug and Mike are passionate about educating people about sports and creating an environment where learning is easy and fun. The brothers hope that as they continue to build and grow, Rookie Road will become synonymous with sports education and great content.

Mike Gursha
Mike Gursha is currently the Chairman and CEO of Rookie Road Inc., a digital media technology company focused on creating and distributing unique and engaging educational sports content. He became CEO in 2016 after serving as a special advisor to the founder. Previously, Gursha was appointed as the inaugural entrepreneur-in-residence at the S.I. Newhouse School of Public Communications at Syracuse University, one of the nation’s top schools of communications. In addition, Gursha has been a founder and early team member at several startups and has extensive experience in technology, media, education, biotechnology and healthcare. He currently serves on the board of directors of New York On Tech and the Whitman School of Management Advisory Council. Gursha graduated magna cum laude from Syracuse University with a dual degree from both the S.I. Newhouse School of Public Communications and the Martin J. Whitman School of Management.
Latest posts by Mike Gursha (see all)
Skip back to main navigation