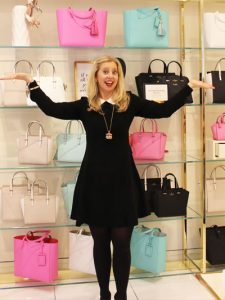 As a 20-something New Yorker steps into the Kate Spade store on 5th Avenue, Nicole Walters ’07 notices something immediately… a yoga mat tucked under the arm of the potential patron. Walters inquires about which yoga studio and type of class the woman attends. That carries over to a conversation about Kate Spade’s new line of activewear. From there, Walters shepherds Jill (they are now on a first-name basis) to another area of the store to see some of the sample pieces.

Though this interaction comes naturally for the ever-friendly Walters, who manages the store, it is part of Kate Spade’s customer connection approach called “muse moves.” The idea is to make an initial connection, the “warm-up,” with the prospective customer before asking to be of assistance or mentioning a product. Walters is masterful in her execution, and she has made sure it’s become second nature for her team as well.

Walters has worked in retail for the nine years since graduation (and in years before) in positions at Nordstrom and Kohl’s before joining Kate Spade. She is one of those people who know what they want to do in life before they can drive. The second-oldest of eight siblings, Walters grew up in Michigan and loved fashion and merchandising from an early age. When it came to choosing a college, Syracuse University kept coming up in all of her searches for top retail programs. One visit to campus convinced Walters there was no place else she wanted to go.

“My mother was already helping my older brother pay for college, and there were six siblings behind me,” says Walters. “Other options closer to home would have been much less financially taxing, but she knew how badly I wanted to go to Syracuse. I don’t know how she did it, but somehow she made it happen, and I’m so grateful.” Walters had every intention of maximizing her time at Syracuse to make her mother’s sacrifices worthwhile. She dived in head first her freshman year, joining the Retail Association and taking on the role of secretary (she would be president the next three years), serving as a member for the University Union Concert Board and working a job in the SU Communications Office.

During her second semester sophomore year, Walters would take on what would be her most significant and rewarding extracurricular endeavor. One of her favorite faculty members and mentors, Amanda Nicholson, former head of the retail management program and now associate dean for undergraduate programs at Whitman, approached her and fellow retail major April Hace ’08 about starting an ENACTUS chapter (formerly SIFE) at Syracuse University. Without hesitancy, Walters agreed.

“It was exhausting and exhilarating,” she explains. “We were literally starting from the ground up—training, recruiting members, getting University recognition, planning events, researching opportunities and making decisions on how we could make the most significant impact in the community.”

Among the many formative efforts of ENACTUS was the partnership with Chadwick House to help women overcome drug addiction and abuse. “We would spend time on Saturdays tutoring the women and helping them with life skills,” says Walters. “It was all about positivity and encouraging them to stay on course despite their circumstances.”

Walters squeezed value out of every waking moment during the school year (there wasn’t much time for sleep), and that carried over to school breaks. After meeting Pete Nordstrom during an on-campus retail lecture series her freshman year, Walters was convinced she had to work for Nordstrom.

“I had gotten Pete’s business card after his talk, and he actually responded to my email,” says Walters. “At the time, all Nordstrom buyers had to start on the sales floor, and he encouraged me to get a job at the store back home over winter break.”

The Christmas chaos was Walter’s first stint at Nordstrom, but she would return to the company full time a few years later. By the time Walters graduated, she had interned at Nordstrom, Macy’s and Kohl’s, taken advantage of nearly every extracurricular opportunity and managed to finish at the top of her retail class. She had offers from several retailers, but Walters felt compelled to head home, so she accepted an assistant buyer position at Kohl’s in Milwaukee, Wisconsin. She was enjoying her time at Kohl’s but didn’t quite see herself there for the long haul.

Walters had kept in touch with Pete Nordstrom. In 2008, she jumped at an opportunity he offered to be an assistant manager back in Detroit. Her seven-year tenure with the company included positions at stores in Cincinnati, Chicago and Seattle and a three-year stint as an assistant buyer. She was managing the Nordstrom Rack in Cincinnati when a position at Kate Spade fell in her lap. After interviewing with the company, she was given her choice of stores to manage.

“I figured go big or go home, so I picked the 5th Avenue store,” says Walters. “I realized that to continue to grow and to do well, I needed to get out of my comfort zone and be challenged. A year later, I can say that it has been a great move.”

Walters hopes Kate Spade will eventually take her closer to home and to her siblings to experience the next phase of life together with spouses and children. “I believe that Kate Spade culture is the right fit for me,” says Walters. “There are support and resources at every turn. I can see my career playing out with this company, and I would love for that to be closer to family.”

No matter where her career takes her geographically, Walters has come to realize that helping people develop and meet their goals is the facet of the job she enjoys most. “My mom has always modeled the importance of helping others and that is what drew me to ENACTUS,” she shares. “It’s part of who I am, and it carries over to my professional life. A significant part of managing a successful store is in training and developing your team. That is something I’d like to do on a regional level within the company.”

Walters has found another outlet for helping to develop talent through her work with current Whitman students as a career mentor. She also serves as a founding member of Whitman’s Young Alumni Advisory Board.

“Having been out of school less than 10 years myself, I feel the students can relate to me,” says Walters. “I really enjoy sharing my experiences and giving them advice on preparing and positioning themselves for a career in retail.”

Though much of the mentoring takes place via phone and email, Walters recently had lunch with one of her students who had come home to the city during a break. “She was so appreciative of the time we spent together,” shares Walters. “It made me think of how valuable these connections can be for students. It is important for me to give back to Whitman, and the mentoring program is the perfect opportunity for me to do so in a direct, meaningful and natural way.”