To the Stein family, the Syracuse University Martin J. Whitman School of Management is more than just a school, more than just an institution. It is a place that seeped into the being of who Joshua A. Stein ’98 was and who he would become. He learned lessons and skills that set him on his life’s impressive path. After his graduation from Whitman in 1998 with a degree in marketing and entrepreneurship and emerging enterprises, he landed a job that he loved as an international banker that took him to live in Singapore and allowed him to travel the world.

When Josh’s life was cut devastatingly short and the Steins considered ways to forever memorialize him, they knew that Syracuse University and Whitman had to be part of it.

“SU was Josh’s happy place, so establishing an endowed scholarship fund in his name was the most fitting tribute and way to carry on his legacy,” said Josh’s mother, Adrienne. She, his father, Chuck, and sister, Allison Stein Goldstein ’01 (VPA), knew that it was exactly what he would have wanted. “Helping to give other students the same experiences and advantages that Josh had at Whitman is a meaningful way we can honor him,” added Mrs. Stein.

In 2006, the Joshua Adam Stein endowed Scholarship fund was established for Whitman students from the tri-state metro area. Over the years, the fund has grown through donations from family and friends, fundraising dinners and golf outings. In addition to the scholarship fund, an undergraduate reception area was dedicated in the Whitman School in Josh’s honor.

Josh and Ali shared a strong sibling bond and a mutual Orange love for their alma mater. With the 20th anniversary of Josh’s death approaching, Ali and her husband, Matt, wanted to do something significant to commemorate the anniversary and to raise money for Josh’s fund. Together, they planned a 20th anniversary golf tournament and dinner.

It was a day-long event that included breakfast, lunch, golf, cocktails and dinner with 180 people participating to honor Josh. “It has been 20 years and having so many of Josh’s friends, including many SU alumni, come to celebrate his life and support his scholarship fund meant so very much to us,” shared Mrs. Stein.

The Goldstein and Stein Families

The support of the scholarship fund also means a lot to the Whitman students who receive it. The fifth and most recent recipient is Crystal Pena ’25, a Whitman student from New York City, who plans to major in accounting.

“I am so grateful to be the recipient of the Joshua Adam Stein Scholarship,” said Pena. “It is truly special knowing that Josh was also a Whitman student and felt so strongly about his experience that his family chose to honor him by financially supporting the aspirations of other Whitman students. I would like to thank the Stein family for choosing to memorialize Josh in a way that helps make a Whitman education possible for students like me.” 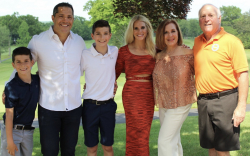 Latest posts by The Family of Joshua A. Stein '98 (see all)
Skip back to main navigation